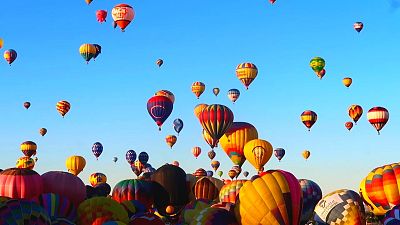 With the event cancelled in 2020 due to COVID-19, the eight-day festival welcomed back hundreds of balloons to Balloon Fiesta Park, in the Wildflower Area of New Mexico’s largest city.

The Rio Grande Valley provided an otherworldly backdrop for the festivities, which saw 671 pilots take to the skies.

First held in 1972, the festival began as an attempt to record the largest gathering of hot air balloons in history.

Just 13 balloons arrived in the city for the inaugural event, but today the fiesta is the largest convention of its kind in the world.

More than 866,000 fans attended the spectacle, which was temporarily halted due to turbulent weather conditions. Two balloons collided with power lines on Sunday, causing brief power outages in the local area.

Organisers are hoping for better weather in 2022, when they will host the 50th edition of the festival.