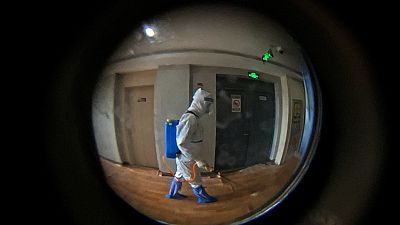 A medical worker wearing a protective clothing disinfectants a corridor of a hotel used for foreigners to stay during a period of health quarantine   -   Copyright  ASSOCIATED PRESS
By Jonny Walfisz  •  Updated: 01/12/2021

A law firm has taken legal action against the UK’s quarantine hotels, accusing them of being a “fundamental breach of people’s human rights”.

PGMBM has issued court proceedings against the UK government for its quarantine hotel on behalf of travellers affected upon entering the UK from red list countries. The firm previously sought a judicial review of the regulations travellers coming from red-list countries have to follow.

Conditions inside these hotels have come under scrutiny in recent weeks. There have been reports of sexual harassment, inadequate food, squalid surroundings, and adverse mental health effects from people’s stays.

“It’s disappointing that the government hasn’t yet realised that this policy is a fundamental breach of people’s human rights. Law abiding citizens who have been double vaccinated should be free from quarantine,” says Tom Goodhead, managing partner at PGMBM.

“The idea that they need to pay for the privilege of their own imprisonment is outrageous.”

The firm’s goal is that double vaccinated travellers will no longer have to quarantine in hotels and that the government refunds all those who were double jabbed and forced to stay in one.

Goodhead says the UK should follow the EU’s example on exempting double vaccinated people from quarantining.

“The people that are contacting us for help every day are not reckless globetrotters. They are typically people who have been forced to travel to care for relatives or attend funerals of their parents or siblings,” he says.

Alongside PGMBM’s case, a series of sexual harassment allegations have been raised against the quarantine hotel system.

The Department of Health and Social Care (DHSC) has had to ensure that solo female travellers receive female guards after 16 women reported sexual harassment claims.

One guard was accused of miming sex in a lift with another demanding a hug.

DHSC made a statement that it “will not hesitate to take immediate action to suspend staff where appropriate and report to the police if necessary.”

Yet some of the women say that their reports have been ignored.

The cost of a quarantine hotel increased in early August by over £500 (€585.08). But the service travellers receive has fallen short of the 5-star price tag.

“It was hellish. Two years ago I was in ICU for a week after I had a stroke, to be quite honest I’d rather go through that again then spending another week in that hell,” Rene Bouwer, a retired NHS secretary, says of her experience in quarantine in the President Hotel in Russell Square, London.

“The food was disgusting. The hotel wasn’t clean, there was PPE lying on the floor, gloves and masks overflowing from bins in the hallways. It was filthy and smelly,” she continues.

Bouwer also was unimpressed with the behaviour of the hotel’s guards.

“There was no social distancing, with security guards literally on top of you and getting in the lift with you.”

Guards would sit outside her room 24/7, yet rubbish would often be left for days.

Only allowed out for 15 minutes each day for exercise in a tiny circular courtyard, Bouwer also talks of the mental anguish of the experience.

“Mentally it was tough, really scary. I think prison would have been better.”

Garikayi Madzudzo complained about the food quality during his stay at the same hotel. He tweeted images of the food sent on the first day.

“The portions and the quality of food is way, way below standard. It neither provides the required nutrition nor is it balanced to promote healthy living,” Madzudzo wrote in an official complaint to the hotel.

The DHSC maintains that “hotels providing managed quarantine facilities are able to meet the vast majority of requirements and must provide guests with three appropriate meals a day, access to WIFI, welfare and health support.”

“Wellbeing support is provided to individuals during their quarantine period. This includes daily welfare checks for everyone in the form of a phone call for the duration of each individual or group’s stay in isolation. Staff will be able to point individuals to the correct resources.”

But a government spokesperson for the DHSC refused to comment directly on any of the accusations.