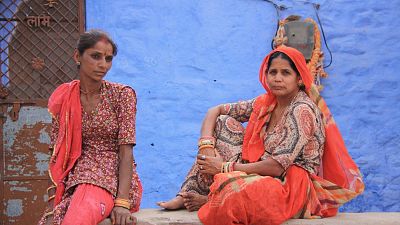 Besides the glow of flames licking our faces from the fire pit, there are no lights around us for miles save for the constellations above our heads. Every so often, shooting stars streak like silent fireworks across the night sky, distracting me from the task at hand.

Soft, floury dough droops between my fingers as I do my best to mimic our desert-dwelling hosts who swirl and pinch theirs to make chapatis for a starlit dinner.

The camels that ferried us here through the brush and sand of the Thar Desert grunt somewhere out in the darkness enveloping us.

Out there, too, are a clutch of small temples we passed to get here. Places of worship to venerate some of India’s 330 million deities, even here in the remoteness of an inhospitable desert.

I had come to Rajasthan, India’s largest and arguably most vibrant region, in search of authentic Indian experiences, and I was getting them in spades.

Days earlier, I had climbed into the driver's seat of our Mahindra XUV500, a robust Indian-made SUV and our wheels for 10 days. We set out west from New Delhi on an epic 2,000 km road trip to explore the mountains, deserts, hilltop fortresses and palaces that make the region so renowned.

Encountering your first cow is part of your initiation to driving in India, I’m told, as I hard brake to a halt. A symbol of prosperity and revered as being sacred, cows always have right of way on the roads.

And this one knows it too, as it stares back at me in a standoff, chewing and nonchalantly blocking my lane as a blur of tuk-tuks, motorbikes and lorries hurtle past the passenger window.

The first of many cows I will meet on the roads around the region (not to mention camels, elephants and goats), this one is putting me on a sharp learning curve. And we haven’t even left the city limits of the capital yet.

Why am I driving? And why in India of all places? I was asked this many times prior to and following my trip and the simple reason is this: because I could. Granted, it wouldn’t be everyone’s cup of tea, and even I have to admit it’s decidedly the most unorthodox way of seeing the country.

With one of the world’s largest railway networks, riding the rails is still regarded as the quintessential way to experience India.

But while the romance of overnight trains and long journeys gazing out on lush landscapes has always appealed, it pales in comparison to having the freedom to set the pace and get off the beaten track.

I have driven in many places around the world but nothing prepared me for India’s roads - and not in the ways you might expect. Beyond the melee of people, animals and vehicles in its towns and cities, Rajasthan has some of the best modern highways in the vast Indian subcontinent.

Overcoming the butterflies and sweaty palms from navigating the relentless, feverish city traffic, I finally begin to relax as we sail down the open road south to my first stop.

Dubbed the "Pink City" because of the uniform rose paintwork of its old town, now faded to a baked clay red, it is perhaps poetic that we arrive in Jaipur as it prepares to celebrate Holi, the Hindu festival of colours.

The city is said to be the definitive place to celebrate and it’s easy to see why. Alleyways and street corners are like crime scenes, ablaze with splotches of neon purple, green, yellow, turquoise and red on the walls and roads.

Blaring music provides the soundtrack to water flights and drifting, kaleidoscopic clouds of exploding coloured powder. Festivities begin in earnest on the eve of Holi with families gathering to sing and dance around bonfires to ward off evil.

Away from the merriment, the real draw is the sight of my first Rajput fortress. Amber Fort, with its honey-hued battlements, clings to the mountainside, a remnant of an age where power rested with the Maharajas. It is one of many such strongholds and palaces they built around the region to seal their authority and prestige.

There is stiff competition for the most impressive one. In Udaipur, the "City of Lakes," the sprawling waterfront palace complex gives Amber a run for its money, shimmering in the mirrored surface of Lake Pichola as I take in the sheer scale of this gargantuan by boat a few days later.

We save the best until last as we head north from Udaipur to Jodhpur, Rajasthan’s "Blue City," where the impregnable Mehrangarh Fort keeps watch over the sprawling city at its feet.

Whether viewed from on high from the shaded rooms and ramparts of the hilltop fortress or weaving through the tumult at street level, the indigo-washed cubed houses and laneways of Jodhpur’s old city are equally as entrancing.

The majority of Rajasthan’s 73.5 million people don’t live near the cities and railway junctions frequented by tourists. It’s only really when I get off the main routes - leaving the sticky heat, fumes and crowds of the cities behind - that the driving experience really comes into its own.

A turn off the highway takes me onto undulating country lanes which wind and wend their way through hillscapes with protruding peaks like cracked teeth, forests where troops of macaques cavort in low-hanging branches, and eventually the Thar desert where we sit preparing dinner.

In village after village, where India’s rapid pace of change hasn’t yet overtaken tradition, I trail behind men wearing hot pink turbans on motorcycles, their passenger’s sarees catching and fluttering in the wind.

In the open countryside, we pass gaggles of devout, barefoot Jain nuns walking purposefully along the roadside, dressed in simple white cloth robes, as well as women with watercarriers or bundles of saplings balanced on their heads.

The novelty of a foreigner in the driving seat is not lost on the locals either, especially the workers in their booths at the many road tolls I pull up to. “Does he have a licence to drive?” one attendant asks my passenger with a bewildered smile.

Savouring yet another surreal encounter, I thank every single one of India’s 330 million gods that I do.

What you need to know about visiting Rajasthan

David flew to India pre-pandemic with KLM which operated daily flights to Delhi from across Europe via its Amsterdam hub.

While the company that David travelled with originally pre-COVID is no longer operating, there are other companies that are currently offering self-drive itineraries in India.

The Classic India tour by Great Road Journeys offers a 14-day coast-to-coast self-drive itinerary. Prices start from €4,000 per person based on two people sharing an SUV and accommodation.

Being driven around instead

The roads in Rajasthan are well-surfaced, modern and relatively quiet but driving is not for everyone. Being chauffeur-driven takes any potential anxiety away and lets you take in the full experience from the passenger seat.

Cox & Kings offers a 16-day group tour (or private on request) with a similar itinerary around the region. Prices for the Classic Rajasthan tour start at €2,300 per person, including flights, 4 or 5-star accommodation and transfers.

Bridge diving in Bosnia: Brave enough to make the leap?