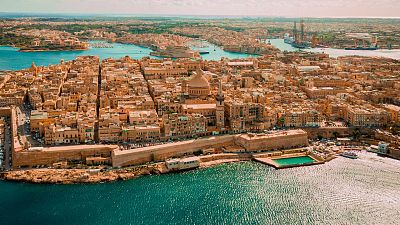 There’s no quarantine, easy entry if you’re fully vaccinated and you can reach it from anywhere in Europe. Plus with 3,000 hours of sunshine a year, you’re almost guaranteed good weather.

Malta might just be the perfect place for a late-summer getaway. But be sure to pack your sunnies as there’s a lot of limestone. It’s beautiful, but it’s very reflective when the sun is beating down.

Anti-vaxxers beware, though. Malta was the first EU country to ban anyone not vaccinated against COVID-19, except children under the age of 12. They enforced this rule in mid-July after a surge in cases brought in by tourists. Read on for details of which vaccine certificates are accepted at the border.

Malta is made up of three islands. The biggest by far is Malta, with the smaller two, Gozo and Camino, easily reachable for day trips.

The country has 7,000 years of heritage - a dream for history geeks. From the UNESCO-protected Ggantija Temples to baroque-inspired St John’s Co-Cathedral, the history of the Maltese islands feels very present.

All three islands are buzzing with alfresco restaurants, nightlife and glorious food - and it’s all just three hours and 20 minutes from Gatwick Airport in the UK.

Malta joined the UK’s green list on 30 June and has retained its spot ever since.

Malta was the first European country to claim it had reached herd immunity and has some of the most relaxed entry requirements for visitors. It is taking part in the EUDCC gateway and does not require quarantine for countries on its green list.

All passengers must present proof of full vaccination (meaning you have to have had your second jab at least 14 days before entering) and are required to fill in a Passenger Locator Form too.

All passengers must present proof of full vaccination (meaning you have to have had your second jab at least 14 days before entering).

Do you have to wear a mask in Malta?

Passengers on public transport, including the popular Gozo ferry, must wear face masks. Masks are mandatory in all public spaces, indoor and outdoor, for all those aged three and over.

But a maximum of two people may remove their masks sitting in outside public spaces if they have been vaccinated and have an official vaccination certificate.

What is there to do on the Maltese islands?

From seeing the sights to swimming in turquoise waters, you won’t be lost for things to do. Here’s what to get up to on each of the three islands.

Malta is steeped in history

In Valletta, the Upper Barrakka Gardens give you some of the best views on the island and Fort St. Elmo is a great spot for overlooking the harbour.

St. John’s Co-Cathedral is one of the prettiest churches in Europe. The exterior of the Church is rather plain, but the interior is a combination of baroque architecture and sculpture. Both the church and its oratory are paved with marble tombstones, under which lie the remains of the Knights of the Order.

Visiting the old capital of Mdina is a must, known for its cafes and picturesque streets. There are numerous museums to visit within the fortified walls and a mix of medieval and baroque architecture.

But that’s not all… The main island is also a great place for swimming. Golden Bay and Anchor Bay are considered the most beautiful beaches for a dip, surrounded by golden dunes and red sand.

The crystal clear waters in Anchor Bay are bursting with marine life - making it an ideal place for snorkelling.

Gozo is a haven for scuba diving

Gozo is Malta’s second largest island and only a 20 Minute ferry ride away. There are a few ferries every hour from early morning until late evening.

The island is considered to have the best scuba diving in Europe. It has dive sites suitable for every level of experience.

There are dive sites off all three islands, but Gozo is particularly popular for its variety and easy-to-reach sites. You’ll easily find dive shops to take you out for the day.

Don’t miss the Citadella in Gozo’s Victoria, designed in the Byzantine and Roman styles - it has been praised as an architectural wonder.

The ancient Ggantija Temples are also located in Gozo - structures that pre-date the Egyptian Pyramids, constructed even before the invention of the wheel.

Comino is a hidden gem of translucent waters

The island of Comino is Malta’s smallest inhabited island. Its tiny population of mostly farmers makes it a peaceful place to visit and is great for a beach day.

Make sure to visit the famous Blue Lagoon, known for having ten variations of blue water. There are cave cruises, speed boat tours and kayaking too.

And if you’re after some history, the Church of Our Lady’s Return from Egypt is a simple but beautiful chapel visit, built by the Knights in 1618.

What events are going on in September?

A fireworks special in Mqabba

On 9 September there is a special firework display taking place over four days, in four locations.

Having kicked off in Gozo, the Fireworks Special continues on the September 9 in Mqabba, on the 11th in Mellieħa, and closes with a grand finale on September 20 in Valletta’s Grand Harbour.

Setting off fireworks is a long-standing tradition in Malta. Displays have been a form of celebration on special occasions for centuries, marking occasions such as the election of a new Pope.

Hear the authentic sounds of Malta

On September 10 there will be a multimedia concert “portraying the authentic sounds of Malta” in Valletta, called Agħti Widen.

The music will be accompanied by video, theatre and narration and is a contemporary homage to Malta’s cultural heritage.

Tickets are around €12 and can be found here.

Party the night away at Malta gay pride

Malta is on everyone's ‘travel gaydar’ right now, especially after it was honoured with the title of European Capital of Culture in 2018. Gay Pride takes place from 10-19 September.

The island promotes itself as being welcoming to the LGBTQ community and has some of the most progressive gay rights in the world.

You can expect festivals, conferences, fashion nights, and a colourful parade.

Yet another concert takes place on 17 September, featuring the best of local musical talent.

Malta Tourism Authority’s CEO Johann Buttigieg says the event will be the "first chance for some of Malta’s finest to come together on one platform".

Tickets start at around €16 and can be found here.

Take to the skies at Malta International Airshow

The 26th edition of the Malta International Airshow takes place on 25 September. Lots of European countries will be taking part, including Belgium, Italy and France.

The airshow is the most photographed event in Malta and is a real sight to behold.

On September 21 it’s Independence Day, one of the five national holidays in Malta. It celebrates the day the country gained autonomy from the United Kingdom on September 21, 1964.

Locals get the day off to take part in a whole host of events and parades. The festival starts four days before the actual feast day and every evening there are live performances by Maltese artists and an array of food stands.

The ‘In Guardia Parades’ usually put on a stunning reenactment of battles fought under the Knights of the Order, while St John’s Co Cathedral hosts a ceremonial mass as well as a concert by the Malta Philharmonic Orchestra.