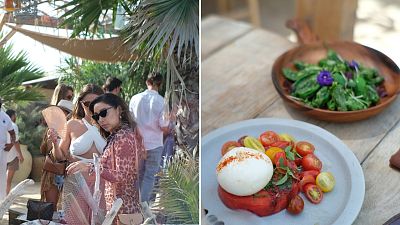 It's clear to see where Saint Tropez gets its reputation. Glamorous couples in sports cars cruise the main boulevard, while mega yachts owned by sports stars bob in the Vieux Port.

The glitzy destination is going through a reinvention. It's still the playground for the 'jet set' who first landed here in the 1960s. But there's a new breed of nightlife hitting the French Riviera's most famous seaside town.

For years it's been very "bling-bling", says Bryan Anzala, the co-creator of Casa Amor, a new bohemian beach club which opened in June by four entrepreneurs Anzala, Hugo Henn, Joaquin Justinien and Tony Or.

Not to be confused with the villa on the UK reality TV show 'Love Island', Casa Amor, on Pampelonne beach in Ramatuelle, is aimed at the wealthy and, often, famous. It hosts parties as well as serving food and drinks.

"They don’t want to show off anymore," says Bryan.

"The time is different. With COVID-19 they want something more natural, easy-going and down to earth. Ten years ago it wouldn't have worked. But now with everything that has happened in the world, we are ready for a concept like this."

When there are DJs playing, you might hear deep house, an ABBA track, or a dance version of Chaka Khan's 'Ain't Nobody,' all at the same time along Pampelonne beach.

"The weekend is particularly special for the beach," Bryan explains. “There are five days - five big days when we have permission to push [the volume] and to bring big DJs. It's not just us, but for all the beach clubs." This meant Casa Amor was able to engage New York-based DJ, Bedouin in a residency.

The gig last weekend was the last one before the venue closes in two weeks time for the season. "It will be sad but we're ready to come back next year, even stronger," says Hugo Henn, Casa Amor's creator alongside Joaquin Justinien and Tony Or.

So what is different about Casa Amor? The concept comes from Tulum in Mexico where Bryan and Hugo ran a restaurant throughout the winter.

"We wanted to bring something different, to create something authentic and bring the Tulum vibe to Saint Tropez," says Hugo. "It's a beautiful place, but something was missing."

"We thought what was needed here was an authentic place with a chilled vibe, hippy, bohemian chic," adds Bryan. "We came with the idea for a 'House of Love,' a chilled place, human-sized, based on sharing."

This concept of sharing is reflected in the menu, which is 'beach perfect': light, fresh and inventive. Signed by Michelin star chef Akrame Benallal, who trained at Saint-Cyr-Sur-Loire and has restaurants in Paris and Asia, it features a mix of starters and three main courses.

"We have a lot of starters compared to other restaurants because we really wanted people to try each dish," says Hugo. "Some people just come for the starters and don't even try the main meat or fish courses.”

“And then we have lots of crazy desserts, for example, we added some tequila in the desserts, so instead of 'Baba Rum we made it with tequila.”

Entertainment from Bedouin's last night, along with the menu costs €250 and people can't seem to get enough of Casa Amor, says Bryan, who is "amazed by how people reacted to our concept."

"We were just tired of our customers going to Mykonos and Ibiza and not coming to Saint Tropez anymore because there was nothing new, so we wanted to bring that clientele back to the south of France.”

This year several new places have opened, including Bryan and Hugo's other restaurant in the port Cafe LaPerose, which offers authentic French cuisine for breakfast, lunch and dinner.

"A lot of big brands are now coming to Saint Tropez, attracting a new clientele, wealthy obviously as it an expensive city, but people want something new," says Hugo. "I'm not saying that we brought everyone back, but there's a new energy.”