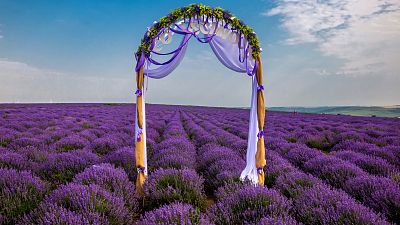 The lavender fields have become a popular spot for instagrammers   -   Copyright  Canva
By Hannah Brown  with AFP  •  Updated: 05/08/2021

Moldova’s lavender industry is coming back over 30 years since it collapsed alongside the Soviet Union.

This time round it’s not just the lavender oil that’s proving popular. The fields themselves have become a hotspot for visitors trying to get the perfect photo for social media.

Five or six newcomers to the industry have been gradually expanding their fields in a trend that has seen Moldova’s lavender oil production double to 20 tonnes over the last 20 years. But that is still a far cry from 1989 when the country produced nine times as much of this fragrant product.

"There is a tradition of this industry in our country, but after the collapse of the USSR it was forgotten,” says Alexandru Badarau, President of the Lavender Growers Association. He adds that industry fell apart because the connection with the “so called centre” in Moscow, where much of the oil was exported, was severed.

"Moldova is producing much less than it could," Badarau explains. "But first we need to prove we're producing a quality product at international standards."

The local variety of lavender in Moldova yields less oil, according to Nicu Ulinici, who inherited his father's farm and harvested his first bushels in 2014.

"But it's higher quality," he says, adding that its aroma is "more pleasant, softer."

The perfect spot for Instagrammers

Alexei Cazac is among a growing cohort of farmers in Moldova fuelling a resurgence in the aromatic herb. He planted his first bushels in 2015.

"Once, in the first year the lavender was blooming, we came and the entire field was just filled with people," the 40-year-old farmer tells AFP on a recent visit.

"It's like the set of a photo shoot. We didn't plan it this way," he says.

Cazac now charges visitors the equivalent of about €2.50 to meander through his more than 60 acres (24 hectares) of lavender fields.

What is lavender oil used for?

The oil is widely used in products such as toiletries, make up and perfumes with its aromas hailed for their relaxing and soothing qualities. Some believe they have the power to counteract anxiety and insomnia.

The comeback in the small country bordering Romania has garnered attention from global cosmetic companies headquartered in western Europe.

Multinational cosmetics firm Weleda, which began sourcing Moldovan lavender in 2005, has described the country as "perfect" for the herb. French fragrance company Mane is another major brand in Moldova whose subsidiary works in the cultivation and production of essential oils.

The Lavender Growers Association says members export 99 per cent of their oil to the European Union, specifically Germany, and to two other well-known lavender growing nations: France and Bulgaria.

Producers in Moldova say Bulgaria, which was also part of the USSR, has benefited greatly from the European Union after it became a member in 2007. But Moldova claims where Bulgaria excels in quantity, they trump it in quality.

Watch the video above to see more of Moldova’s picture perfect lavender fields.