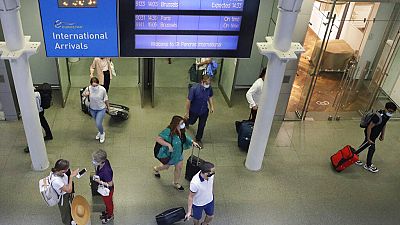 Fully vaccinated travellers arriving in England from France will no longer have to quarantine, the UK government has announced.

London last week decided to waive the 10 days of self-isolation requirement for people coming from amber countries — which included the US and EU countries — provided they had been given both COVID-19 jabs.

But France was in the UK's "amber plus" category, meaning the quarantine restrictions remained in place.

It sparked criticism from the French government who called the decision "discriminatory" and "scientifically unfounded". Britons in France also slammed the move, telling Euronews it was infuriating.

Now, the UK government is lifting the quarantine requirement for arrivals from France.

The Department for Transport said in a statement that the change — effective from 05:00 CEST on Sunday, August 8 — is because "the proportion of Beta variant cases has fallen".

The French Minister for European Affairs, Clément Beaune, welcomed the announcement on Twitter, writing that "fruitful exchanges with our British partners have made this expected change possible."

What else has changed?

The French islands of Mayotte and La Réunion were however moved to the red list alongside Georgia and Mexico.

"They present a high public health risk to the UK from known variants of concern, known high-risk variants under investigation or as a result of very high in-country or territory prevalence of COVID-19," the Department of Transport said.

La Reunion is currently under a partial lockdown with daytime travel restrictions and a nighttime curfew after the incidence rate shot up to reach 353.1 cases per 100,000 inhabitants last week.

Only British or Irish nationals or people residing in the UK are allowed to enter the country if they travel from a red list country. But they have to take a test prior to departure and spend a mandatory quarantine in a managed hotel upon arrival, during which they must submit to two COVID tests.

The government also announced that the cost of a stay in managed quarantine facility will be increased to £2,285 (€2,682) for a single adult and £1,430 (€1,679) for a second adult "to better reflect the increased costs involved with providing their quarantine, including transport to the hotel, security, provision of welfare services and the two PCR tests".

Four countries - India, Bahrain, Qatar and the UAE - were removed from the red list and put on the amber list.

Meanwhile, a number of European countries have been moved from the amber list to the green list.

These are Austria, Germany, Slovenia, Slovakia, Latvia, Romania and Norway.

Travellers from green list countries must take a COVID test before travelling and take another within two days of arriving in England. They only need to quarantine if the test is positive.

“While we must continue to be cautious, today’s changes reopen a range of different holiday destinations across the globe, which is good news for both the sector and travelling public," Transport Secretary Grant Shapps said.

Health and Social Care Secretary Sajid Javid added that "today's announcement also demonstrates the need for continued caution. Further countries have been added to the red list to help protect the success of our vaccine rollout from the threat of new variants."

The UK recorded more than 29,300 new infections on Wednesday. The country has been facing a surge of infections over the previous four weeks blamed on the Delta variant, which first originated in India.

But the number of new deaths and hospitalisations remain much lower than in late January when similar levels of daily infections were observed. This is attributed to the vast vaccination campaign.

The country has one of the highest vaccination rates in the world with 88.7% of the adult vaccination having received at least one dose of the vaccine. Nearly three quarters are fully vaccinated.

What has been the reaction?

Virginia Messina, the acting CEO of the World Travel & Tourism Council (WTTC), said: “The entire UK travel and tourism sector, the many thousands of British travellers already in France, and those with future plans, will be breathing a sigh of relief now that returning fully jabbed Brits won’t need to quarantine, and that the confusing and disruptive amber plus list has been effectively abandoned.

“However, the requirement for fully-jabbed UK travellers to take expensive PCT tests will still deter many from travelling.

“We are disappointed that more destinations were not added to the green list. But the additions of India, Bahrain, Qatar, and in particular the UAE – a major winter sun destination – will provide a massive boost to travel and tourism businesses over the coming months.

“Once again, we call on the US government to open its borders to fully vaccinated UK visitors, a move that would have a massive economic benefit both here in the UK and across the Atlantic.”

Where are Scotland’s most beautiful, crowd-free lochs?

Turkey travel plans? Everything you need to know about the wildfires