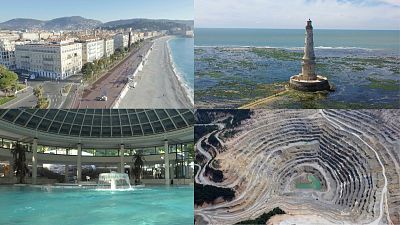 UNESCO has added 33 new sites to its World Heritage List - from a prehistoric solar observatory in Peru to some 7,000-year-old rock art in Saudi Arabia.

More sites have been added than usual in 2021 after the committee failed to meet last year due to COVID-19. After sorting through a long list of candidates from the last two years, the World Heritage Committee met in Fuzhou, China, to vote with many participants attending virtually.

Of the new spots added, many were in Europe including the Porticoes of Bologna in Italy, the continent's Great Spa Towns and Colchic Rainforests and Wetlands in Georgia. A narrow vote also saw the city of Liverpool lose its World Heritage status last month after a series of developments in the historic area.

Recognition by the UN's Educational, Scientific and Cultural Organisation means a landmark has "outstanding universal value".

What counts as 'heritage' can be different with three categories covering all of the sites: cultural significance, environmental significance or a combination of both.

Since the first locations were added in 1978, more than 1,000 UNESCO World Heritage Sites around the world have been added to the list from the canals of Venice to Yellowstone National Park and the Galapagos Islands.

When searching for holiday destinations, many of us build our trips around these significant destinations.

Known as "the UNESCO effect", it means that being added to the list can help a previously unknown destination skyrocket in popularity.

Press play on the video above to see some of the European sites added to the UNESCO World Heritage list.