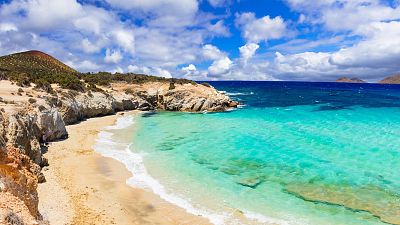 Greece has 227 islands that are inhabited plus several hundred more that aren’t. And just when you think you’ve seen it all, you find there’s more to discover.

Tinos, Syros and Symi represent a trifecta of Greek island grooviness: Tinos, because while very close to popular Mykonos it rocks a mellower vibe (and mellower prices) and beautiful landscapes; Syros on account of its captivating island capital of Ermoupoli, and far-flung Symi because of its history and exotic allure.

At nearly 195 square kilometres, Tinos is nearly twice the size of neighbouring Mykonos (only about 15 minutes away by high-speed ferry). Its main town is home to an iconic church, Panagia Evangelistria, or Our Lady of Tinos. The church’s possession of a supposedly miraculous icon of the Virgin Mary makes it, and Tinos generally, a place of great Greek Orthodox veneration and Christian pilgrimage.

That’s especially so every Dekapentavgoustos, 15 August, the date of the Dormition of the Virgin Mary when the faithful crawl from the harbour up the long road to the wedding-cake style church. Other festivals include those in Tsikniás and Exómbourgo and the gastronomic feasts involving miniature artichokes and raki in Falatádos, and the festival of honey in Kámpos.

There are plenty of down-home Greek tavernas, but you can exercise more posh options at Marathia in Agios Fokas or the trendy Thalassaki, a seaside taverna at Isternia Bay where, yes, arrival by helicopter is an option.

But Tinos has more to offer than religious heritage and foodie fests. Pagans can pay homage to Poseidon at his eponymous temple in the area around Kionia. The island’s rugged interior is dotted with more than a thousand ornate Venetian stone dovecotes and unspoilt villages like sleepy Kardiani and Mirsini and the livelier Pyrgos, in a region famed for its green marble and where even the local bus shelter is made of marble.

Renowned great artists of marble carving such as Gyzis, Lytras, Chalepas, Filippotis and Sochos have called Tinos home. Around Volax, amidst vineyards and fields of artichokes, colossal boulders lend the countryside an ethereal atmosphere. The gnarled peak of Exomvourgo is another unusual feature of the Tinian landscape.

And of course, the beaches. Tinos has about 41 of them in different shapes and sizes. Standouts include Agios Fokas, an organised beach replete with beach bar and sun loungers, while Livada boasts some interesting geological formations and Kolimbithra is the place to go for a hearty dose of golden sand and even the chance to do a little surfing.

Syros approximates Mykonos in size but beyond that, the similarities fade away. Its chief port and city, Ermoupoli, is the capital of the Region of the South Aegean, reachable by ferry from Piraeus in about three hours and 25 minutes.

Venetian influences and neoclassical mansions with intricate-carved balconies make Ermoupoli look nothing like the towns you’ll find on islands elsewhere in the Cycladic archipelago. The city was built in the 1820s during the time of the Greek War of Independence, and until recently its prosperity had much more to do with trade than tourism.

But the history of Syros goes back even further. There was an early Bronze Age settlement and lots of incursions from various corners of the Mediterranean. But, from 1204 to the day in 1522 when Barbarossa moved in, the Venetians ruled the roost. One of the two hills that rise above the port is the setting for medieval Ano Syros, crowned with the 13th century Catholic cathedral of St. George. Elsewhere, The Assumption of the Virgin church has an icon by El Greco.

Partly because of its location in the Aegean, Syros and Ermoupoli in particular has become something of a foodie destination - despite the fact that the gastronomy scene gets more press, Syros is where the really interesting restaurants are. One such is San Michali Food & Culture, which combines the culinary imaginations of Chef Alex Karakatsanis with mesmerising sea views.

Sun, sand and sea in Syros

While Syros is not known for its beaches, there are several on the island. One of my favourites is Galissas, about five kilometres north of Ermoupoli. Galissas beach straddles a very large bay, and the surf is so gentle you might think you’ve just found the biggest swimming pool in the Aegean. It’s great for families with small children.

But because the island capital it’s so charismatic, I’d recommend staying there and ideally in the beautiful seaside Vaporia neighbourhood. If there’s availability, try to book a room at the very new, very cool Aristide Hotel there which has just nine suites, peppered with original artwork, in a beautifully restored Greek Neoclassical mansion. The mastermind behind the hotel is Oana Aristide, a published author (definitely put her novel Under the Blue on your summer reading list) and like me a lover of the still relatively obscure, yet really quite centrally located island of Syros.

Now, when you hear the words “Dodecanese islands” you probably think of iconic holiday spots like Rhodes and Kos - but chances are you don’t give much thought to remote, arid Symi. Well, if you caught the ‘80s flick Pascali’s Island, starring a dashing Ben Kingsley and delightful Helen Mirren then you might have, because Symi stood in for a fictitious mysterious island in the waning days of the Ottoman Empire. In fact, while Rhodes is to the south of Symi, Turkey is both east and due north.

Historically, the shipbuilding and sponge industries kept Symi going, while today tourism does the job and little wonder, given the absence of large-scale commercial development. The harbour town of Gialos is a charmer where tall stones houses painted in shades of indigo, ochre and terracotta dominate.

One of the most atmospheric places to stay in town is a hotel called The Old Markets, a Greek National Monument which true to its name once housed a galleria of shops. The building and adjoining Captain’s Mansion have been meticulously restored and no two rooms are alike. You could say the same of Symi’s beaches: mostly a succession of quiet, half-hidden coves, some of which are only accessible by boat. If you do crave a busier holiday scene however, Rhodes is only about an hour’s ferry ride away from Symi.

Anthony Grant periodically posts hotel and travel recommendations on the Greek islands and nearby places on his blog, Greek Column.