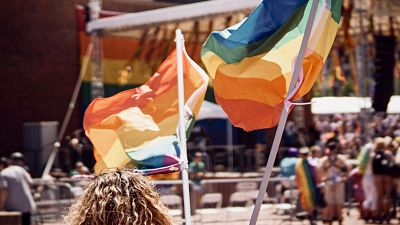 One of the cornerstones of the EU is freedom of movement for its citizens. However, in reality, this is not the case for many LGBTQ+ people.

Freedom of movement is based on the assumption that the EU citizen is heterosexual. If a ‘traditional family’ moves to another member state, the parents’ marriage certificate and the children’s birth certificates will be recognised. The parents will enjoy all the rights and duties of married couples. Their children will have two legal parents. The family will be able to focus on finding employment or self-employment, and a place to live.

In many cases for LGBTQ+ people moving to certain member states, the couple ceases to be legally a couple, becoming instead two unrelated individuals, and their child or children go from having two legal parents to only one legal parent or (in a few cases involving surrogacy) no legal parents.

What happens when a child has no nationality?

The impacts of this on LGBTQ+ people can be stark. As in the case of Eleni Maravelia, President of the Network of European LGBTIQ* Families Associations (NELFA).

She is Greek, her wife is British and they live together in Spain. When their first child was born seven years ago, the difficulties began.

“We had a baby and she didn’t have any nationality, because in Spain you get the nationality from your parents, you don’t get Spanish nationality just for being born in Spain,” Eleni explains.

Their daughter was also not eligible for British nationality. Eleni, as the biological mother, received fertility treatment outside the UK - and because she was not married at the time, the UK wouldn’t recognise her partner as the child’s parent.

Suddenly, a parent's worst nightmare happened. At just three months old, Eleni’s baby daughter was diagnosed with cancer. As she began treatment, it became clear that she may have to travel outside of Spain if she needed care that was not available through its medical system. Yet because of the laws surrounding rainbow families (families with LGBTQ+ parents) in the EU, they could not get her a passport.

This complication added unnecessary stress at what was already an extremely challenging time for the family. It was a stress that no ‘traditional family’ would ever be faced with.

“If I was a Greek man and my wife was British, from the moment the children were born they could have British nationality, Greek nationality and a year later Spanish nationality,” Eleni says.

After much campaigning and wrangling, eventually the needs of the child were put first by the authorities.

“We managed to get some sympathy from the Greek consulate in Barcelona,” Eleni says. “They actually transcribed the birth certificate with just me as a single mother so we were able to get a passport only because of the fact that she was very sick.

How going on holiday can have added complications for LGBTQ+ people

The current outlook also affects LGBTQ+ families who have full rights in their home country. If a rainbow family goes on holiday to certain Member States and something happens to the child, they may be unable to give medical consent or sign liability waivers as their legal relationship to the child is non-existent when they cross the border.

“It can happen with same sex couples who don’t have children if they have an accident lets say and one needs to get consent, they will not be able to do that if they are not recognised,” says Alina Tryfonidou, a Professor of European Law at Neapolis University Pafos and co-author of a recent report on obstacles to the free movement rights of rainbow families in the EU.

“Rainbow families exist and they will continue to exist irrespective of what will happen with the law. It’s just a matter of whether you want to recognise them and make their lives easier and respect their rights as you should, or if you will rather simply ignore reality and brush them under the carpet and pretend they do not exist.”

What can the EU do to help?

The EU has no jurisdiction when it comes to family law, which is determined by individual member states. However, when it comes to cross border issues such as the ones that affect rainbow families, the EU does have power. In June 2018, the Court of Justice of the European Union (CJEU) issued a landmark judgement, recognising that same-sex spouses are also spouses under EU freedom of movement laws.

The case involved Mr Coman, a Romanian man whose American partner wanted to move to Romania but was not granted a residence permit because they were a same-sex couple. The court’s decision meant that same-sex couples have to be treated the same as opposite sex couples when it comes to family reunification rights. Yet three years on from that decision, Romania has still not granted the residence permit.

Tryfonidou believes that the will is there on the part of the EU to protect rainbow families but it is difficult when certain Member States are against LGBTI rights.

Some European Member States believe that the issue of rainbow families and same-sex relationships is a moral one and is a matter of national identity. Even when the EU has jurisdiction and the court makes a judgement, such as the Coman case, they do not want to be dictated to.

“I don’t really understand this point of national identity or traditional values because it’s wrong,” says Björn Sieverding who has two foster children with his husband in Germany.

“Traditional values are the lived reality within rainbow families - we take care of each other, we love each other, we take responsibility for the children, the children live with us on a daily basis, so besides the fact that we have a different sexual orientation there is ‘normal family life’. So to argue that there is a threat to society or that even a single rainbow family can disturb the public order is not a good argument.”

The dark reality of being LGBTQ+ in some countries

Yet it is an argument that gains great traction in places like Bulgaria. In fact it is used as a tactic by some far right political parties to gain electoral support. Recently in the country, LGBTQ+ events have been targeted as another election is looming following a failure to form a government earlier this year.

Lilly Dragoeva is the executive director of Bilitis, the oldest LGBTQ+ organisation in Bulgaria. She has seen this happen first hand in recent weeks. On the 15th May, “Local activists organised Burgas Pride for the first time,” she says. “There was a protest organised against Burgas Pride from local political activists of political parties that use this nationalistic rhetoric.

“Over 300 people attended this protest while the Pride participants were not more than 40 or 50 people. The counter protesters were throwing objects at the participants, including bottles of water, eggs, cucumbers, even a smoke ball.”

She describes it as the scariest event she has attended in her time as an LGBTQ+ activist. At one point they started burning a pride flag. “I was thinking they might really start throwing bombs at us or molotov cocktails, as this had happened during the first Sofia Pride in 2008 and I felt really intimidated by this,” she confides.

Similar protests had occurred at two LGBTQ+ book events in the past week alone. On Saturday 12th June Sofia Pride is due to take place and the Bulgarian LGBTQ+ community has faced threats from the same ultra nationalist groups and there are fears that there will be more violence.

Lilly feels that countries like Bulgaria use their EU member state status as a shield to protect them against reputational damage outside of Europe. This then makes it hard to draw attention to Bulgaria’s LGBTQ+ rights abuses to the international community.

She believes that the EU has a role to play in improving the situation in both cross-border affairs involving rainbow families and improving general LGBTQ+ rights within countries like Bulgaria.

Lilly believes the best place to start is by raising awareness. “I have spoken with representatives of different institutions, not only EU but international institutions, telling them about the situation in Bulgaria and they are not aware at all,” she says.

Part of the reason for this is the lack of press freedom in Bulgaria. The country was ranked 112th in the 2021 World Press Freedom Index, the worst in the EU.

Björn Sieverding also thinks the lack of awareness around LGBTQ+ issues is part of the problem. He thinks it is best for the EU, “not to punish governments who don’t care or don’t want to do anything for rainbow families or LGBTQ+ people in general, but to convince normal people on the streets, the citizens, that the values of diversity or general acceptance of everyone, including LGBTQ+ people, is good for society and there’s no threat behind it.”

Despite the challenges of being an LGBTQ+ person in Bulgaria, Lilly sees the positive impact her work has on young people. While there is a temptation to move to a place where her identity is protected, she wants to stay in her country for now.

Lilly, Eleni, Björn and Prof Tryfonidou aspire towards the same goal: for LGBTQ+ people and their families to be respected and to have that reflected in legislation and in people’s attitudes, so they can live their lives without fear or prejudice.

After all, the European Union’s founding values are “human dignity, freedom, democracy, equality, the rule of law and respect for human rights, including the rights of persons belonging to minorities.”