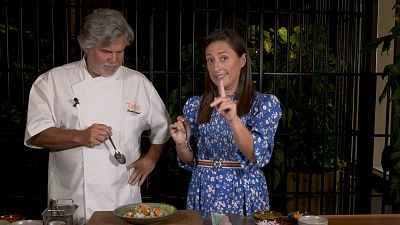 Richard Sandoval had a dream: to introduce made-from-scratch Latin American food to the world. Having developed a respect for fresh, authentic ingredients under the tutelage of his grandmother, he went on to earn a reputation as "a master of Latin American cuisine".

Today, the Mexican-born chef-restaurateur and TV personality has more than 45 restaurants spanning the globe from New York and Tokyo to Dubai. At Toro Toro Dubai, ceviche is one of the signature dishes on the menu and with 28 June being National Ceviche Day in Peru, now is a good time to learn the art of assembling a mouth-watering ceviche.

Classic Peruvian ceviche is a dish of raw sashimi-grade white fish, such as sea bass, cured in ‘leche de tigre’ and served with cubes of sweet potato, sliced onion, chilli and coriander, to taste. Richard likes to add cubes of sweet potato boiled in orange and lime juice, seasoned with sugar, star anise and cinnamon.

Tiger’s milk (leche de tigre) hasn’t got any milk or tiger products in it. The fanciful name is a nod to its milky appearance and powerful bite. It’s made by blending raw white fish, which emulsifies the liquid, with fish stock, lime juice, onion, celery, coriander, garlic, ginger and habanero chillies.

"Save your sashimi-grade fish for the base of the dish," says Richard. "Use any fresh white fish to emulsify the leche de tigre. And remove the habanero seeds to reduce the heat without losing the flavour."

The sashimi-grade fish is cured in the leche de tigre, and a second sauce, made with avocados, lemon juice, serrano chillies, coriander and salt, is layered on top with more slices of onion, coriander and ‘cancha’, a dehydrated Peruivan corn snack, which adds the perfect crunch.