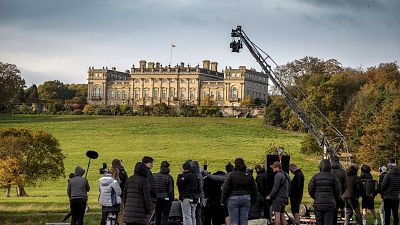 People love picturing themselves in their favourite film or TV series.

With the quality of shows available on Netflix, who wouldn’t? Whether you’re a fan of crime dramas or pure horror, there’s so much on the platform to sink your teeth into.

Some of us are so in awe of our favourite programmes that we go out of our way to find out exactly where they were filmed.

Cinematography is a fine thing, and research commissioned by TV and cinema company OnBuy has found that tens of thousands of us each month are investigating where these shows are being shot.

From abandoned university campuses to sprawling Cape Town beach estates, you might be surprised to find out where some shows were filmed.

Here are some of our best TV and film finds that you can visit now.

Stone Mountain National Park is Georgia’s most visited attraction year-round, with a cinema, camping resort, and annual family festivities across 1200 hectares of woodland.

It’s also home to many of Stranger Things’ outdoor scenes despite the show being set far away in the fictional town of Hawkins, Indiana.

The park’s 5km hiking trail contains a disused railway track, familiar to fans of the show for its placement in a number of key plot moments.

Many cast and crew members have recently been spotted returning to the park for filming, armed with smoke machines and plenty of special effects.

Known in the cult-classic-turned-megahit as the ‘Summerhouse Estate’, Top Boy covertly switched locations to East London’s Samuda Estate when the programme was purchased from the UK’s Channel 4 by Netflix.

They had very little say in the matter, given that their original location, originally based in South London had been demolished.

This estate is a housing complex where even the characters' bedrooms were shot from within, omitting the need for domestic sets.

The buildings house over 1,000 people and have changed very little since their assembly at the peak of 1960s brutalist concrete architecture.

A post shared by University of South Wales (@unisouthwales)

Sex Education has been praised for its blending of British and American set design that cherry-picks different elements of each country’s high school culture.

The scenes set at Moordale Secondary School were filmed at an abandoned university campus in Caerleon, Wales. Its huge grounds have been well-preserved and provided the perfect location for the characters’ colourful coming-of-age stories.

Fans of Otis and his glamorous therapist mother Jean’s hillside home can book a stay in the iconic location. There might be a bit of a wait, though, as more than 13,000 people search for the Wye valley retreat each month.

The filmmakers behind the Spanish crime thriller were not allowed to film outside the Royal Mint of Spain for security reasons. Instead, they opted for the Spanish National Research Council’s (CSIC) exterior for its imposing, dramatic feel.

The substitute bank plays a part in the city’s ‘La Casa de Papel’ walking tour where fanatics can trace the steps of their favourite criminals in a “unique and experimental” trip through the show's key locations. Superfans are known to don Money Heist’s iconic white mask and red bodysuit costume when doing so.

This ancient Tudor-style mansion exudes the exact kind of sinister energy necessary to feature in Netflix’s most successful horror to date. To say the home takes on a life of its own in the show would be an understatement.

The house is a remarkably creepy sight and not one for the faint-hearted. You might be surprised to discover that, like Stranger Things, the show is also filmed in Georgia.

We never had the Deep South down as a playground for all things spooky.

Many of this dystopian anthology’s more recent episodes take place across the Atlantic, despite the cast and crew having never stepped foot on US soil.

Creator and writer Charlie Brooker conceded it was “too expensive” for the material to be shot in America and kept the dream alive by using a number of alternative locations around the world.

Cape Town’s gorgeous Constantia Estate, for example, acted as the California mansion that imprisons brainwashed teen pop singer Ashley O, played by Miley Cyrus. Its streets were also used to create a distinctive Malibu-esque feel that had all of us fooled.

Another episode, the Emmy-award winning ‘San Junipero’, features the city in great detail through its long stretches of sand and has been long praised for its stunning landscapes that come together to make one of Black Mirror’s more uplifting creations.

Power of a placename: Ireland’s many Yr Wyddfas