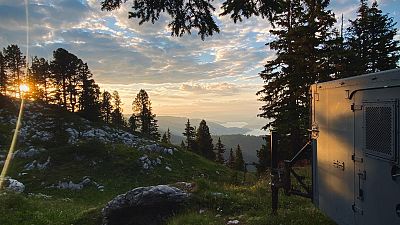 There is possibly nothing more socially distanced than spending a night alone in a polar shelter.

Perched on a mountain top at 1830 metres above sea level, with Lake Annecy sparkling in the distance and pine tree speckled peaks protruding through cloud inversions, these particular shelters may not be quite so hostile.

Although, for me, finding them in the first place is part of the challenge.

After a 50 minute drive from Annecy, we reached the bottom of the La Sambuy ski lift in the small, former farming town of Seythenex in the Annecy Mountains and headed upwards along a forest path, the smell of pine filling the warm early evening air.

It must be 'direction summit', I decide, knowing that the 'Shelter Experience' is based in the grounds of Là Haut mountain chalet, at the top of what would normally be a steep black ski run in winter.

"'L’Ô'? It's over there," replied a group of French hikers, who saw me studying the signpost, "but I don't think you can sleep there”.

"Oh yes, you can," I reply, "it's very private," and we head off in the direction they pointed us, away from the ski lift, through the trees and breaking out into mountain pastures filled with many cows, placidly watching us.

After an hour of hiking, we hop over an electric fence to the farm L’Ô de Seythenex. The guidebook must be very generous with its timings, I thought, as it had suggested two hours to get there.

Then the penny dropped. My French pronunciation had defeated me again, with 'La Haut,' sounding very like ‘L’Ô'.

After watching a juggernaut of goats descend the mountain back to the farm, we tightened our backpack and ran all the way back down in about 20 minutes.

Back on the correct path towards chalet La Haut, we are picked up halfway for a bumpy 4x4 ride to the camp.

Delighted to have finally arrived, we explore a treasure trove left for us in the 'canteen shelter' containing beers, a bottle of wine and a fondue to cook for dinner.

The shelters were used in major Polar expeditions by French explorer, Paul-Emile Victor, over a period of 29 years.

During one expedition in 1951, Victor discovered that under its ice sheet, Greenland is composed of three large islands. In 1952 he was awarded the Patron's Gold Medal by the Royal Geographical Society of London for his work.

As for the shelters, they were later used as an observation point for the Army and in 2015, rather than being abandoned, were refurbished and repositioned in the heart of the Massif des Bauges Regional Nature Park.

The camp consists of a technical shelter (with a dry toilet) and two sleeping shelters. The main cabin - the Vanoise Shelter - is equipped with a comfortable double bed and a large window looking out over the Vanoise, the third highest mountain range in France.

As the 4x4 leaves us, we find ourselves now all alone in nature.

The wobbly warrior and the drowning dog

Back in Annecy, and a bike ride along turquoise coloured water (caused by plankton on the bottom of the lake) on a warm day confirms that finding a quiet spot of beach, even with coronavirus restrictions, is near impossible.

But arriving at NYC SUP at Sevrier, on the north-western banks of the lake, we are surrounded by mountains, including Annecy's tallest, the Tournette, and a peaceful piece of beach, with just a few people, and their dogs, splashing about in the water.

“Yoga paddle is the best thing to connect with all the elements," says our instructor, Elodie Bossuto, introducing us to what lies ahead.

"It’s different because you have to concentrate and the muscles work differently. It’s more fun, it's good for your balance and makes you more efficient back in the studio."

“Any advice for SUP yoga?” I ask before we paddle off.

“Don’t have breakfast beforehand” she replies.

Too late for that I thought as my other half informs me he’s feeling seasick and might throw up.

We paddle out further into the lake and form a circle where we go through various poses, made a whole lot harder by the unstable surface of the lake.

I try to get into a warrior pose while simultaneously taking a photo, but make a wobble too far, and - ‘plop’ I’m in the water - said to be the purest in Europe, fed by melted snow from the mountains. A refreshing start to the day.

We gently paddle to another spot and run through another series of poses. I'm gradually getting used to the extra balance skills needed. After about an hour we are back on dry land, enthused with the benefits of yoga paddle.

NYC SUP runs a range of classes, some with breakfast or a BBQ at the beach afterward, where they make burgers with local reblochon cheese.

Owner, Benoît Mouren tells me the idea for SUP on lake Annecy was born after he started his sports challenge website. “It was a place where people met and the idea was to set up challenges in all kinds of sports. People were even inventing sports like underwater Pétanque".

"Stand Up Paddle was a new sport at the time- so we saw it coming and then I started doing some small events and races. I really liked the sport, so I decided to explore everything that was possible to do with it.".

Benoît chose Sevrier to set up NYC SUP as "its a perfect spot to explore the lake, the water is very clear this side of the lake and we have many nice rides from here.”

With beginner boards, race boards, yoga boards, and giant boards for six to eight people, there are many different ways you can enjoy a SUP tour.

Back on solid ground we head back Les Ô d'Annecy, our BnB in Saint-Jorioz, for a treetop Aperol.

But this was one wobble to another.

Set amongst the canopy outside their one-hundred-year-old property, owners Ta and Bernard have created a treehouse room, made out of netting, possibly the kind local fisherman use to catch the emblematic féra fish, which flourishes in lake Annecy, I wonder.

Bouncing up and down as we ascend a net tunnel leading to the treehouse, we are greeted with canapés, sparkling wine, and stunning views of the lake’s west shore.

The restaurant in Annecy offers a restaurant menu by Stéphane Buron. MOF 2004 and Chef of the two-star restaurant Le Chabichou in Courchevel. Stéphane Buron created for Black Bass Hotel gourmet recipes. A friendly restaurant, creative cooking, and an amazing place!

Talloires to the Flora

The new trendy restaurant at Talloires, with 3 different areas: The Brasserie, the Camion Blanc and the festive bar open until 2AM. A privative swimming pool is also available for all the restaurant’s clients.

Take a peek inside the world's weirdest AirBnbs