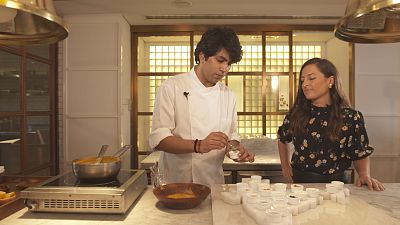 In April 2021, Himanshu won Chef of the Year at the UAE’s What’s On magazine awards, while continuing to grow his global reputation with his ongoing series of four-hand dinners with chefs from Michelin star-winning restaurants around the world. Riccardo Camanini of Italy’s Lido 84 and Ana Ros of Slovenia’s Hisa Franko were the latest luminaries to join him.

Despite the lavish creations found on the tables at Trèsind Studio, Himanshu’s favourite dish is a humble Indian staple of boiled rice and lentils known as ‘khichuri’ or ‘khichdi’.

“There's a great story behind this dish because it's one of those dishes which is prepared in every part of India, but every household in every region makes this dish with their own set of ingredients,” says Himanshu.

It was the dish’s variations that inspired Himanshu’s version of khichuri, which he often serves as part of his degustation menus. Rather than recreate his own family’s recipe, he adds 20 individual condiments from different regions of India, so each mouthful takes the diner on a journey through India’s culinary diversity.

The moral of this dish is that there’s more to India than masala. Those willing to experiment will discover that boiled rice and lentils can be a playground for India’s bounty.