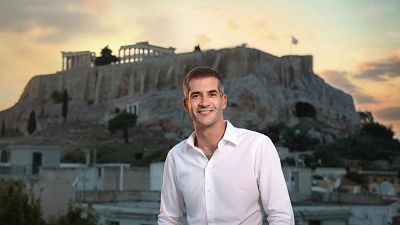 There are only a handful of big cities that can make even Rome seem young, but with nearly four millennia behind it Athens is definitely one of them. Think twice, though, before you call it "ancient" and move on because in its staying power the sprawling Greek capital is also confoundingly modern.

In a wide-ranging conversation with Kostas Bakoyannis, the energetic 42-year-old Mayor of Athens and scion of one of Greece's best-known politically-minded families (Kyriakos Mitsotakis, the Prime Minister of Greece, is his uncle), a picture emerges of a future-forward leader thrown some curveballs by the coronavirus pandemic, to be sure, but eager - like everyone else - to look beyond it.

Even though "Athens as a whole has been overlooked," Bakoyannis says, you might say the city has always been ready for its close-up - sometimes, as now, with a necessary dash of defiance. "The pandemic hit at a particularly cruel time," he says, "just as we're coming out of 10 years of an unprecedented economic and financial crisis and emerging with a sense of newly found optimism and dynamism — and this is actually the greatest challenge that we face, to make sure that despite the pandemic we don't lose any more precious time, so that this crisis will not become an excuse for another lost decade or lost generation in the city of Athens."

In this context, one of the revitalisation projects he mentions is the ancient site of Plato's Academy, which - while relatively unknown - is, he says, "extremely important for the city of Athens,” adding, “we are in the process of hopefully finalizing our agreement with the Ministry of Culture for a project that involves both remodelling the area and protecting the archaeological sites, and at the same time creating a different experience for both Athenians and visitors."

Athens is getting greener

AG: Athens is not generally thought of as a ‘green city’. Is this a misconception, and are there any changes afoot to make it greener?

KB: Athens is a modern, vibrant metropolis. We take great pride in our ancient inheritance much as we take great pride in our modern self. We are actually in the process of an ambitious but realistic project with three explicit strategic goals: one, to reclaim or liberate quality public space; two, to adopt a new model of sustainable mobility and three, to make sure that we change without losing our soul. Meaning that we don't want Athens to turn into a theme park.

We’re focused on building a resilient city, meaning that we pay special attention to our green areas, be they the hill of Lycabettus, the National Garden, Filopappou Hill. And at the same time we are trying to actually change our neighbourhoods with nature-based solutions: pocket parks is one such project, new by Athenian standards, that's already bearing fruit [three have already opened, including one in the hip Pagrati neighbourhood].

At the same time we’re moving forward with the architectural competition for the new Museum of the City of Athens. There is as yet no museum especially dedicated to the history of Athens throughout the millennia, but we are about to make a major step by opening the architectural competition for the design, in cooperation with the Greek Ministry of Culture.

AG: What plans are in store for the much-loved Mount Lycabettus, with its sweeping views over Athens and the Acropolis, and the National Garden, another famous Athenian green space?

KB: Residents love Mount Lycabettus as well as visitors, and that's what it's all about: creating different experiences for everyone, for all Athenians, whether they are Athenians for a day or Athenians for a lifetime.

We are preparing to start public works within the next few weeks, the idea is to apply nature-based solutions to fix the road that leads to the parking lot at the top [note: sounds like a great idea, because right now even finding that road can be tricky] and in time, to revamp three kilometres of walking trails.

The National Garden is a true national treasure and requires special care and respect; we are about to start some improvement works in the garden. It's not just a green space, there's a lot of history and culture there, tied to the history of the modern Greek state. It was founded by Queen Amalia back in the day, and in many ways it resembles a botanical garden which means that we need to be extremely careful and deliberate."

AG: Though Athens has had issues with traffic congestion, in the past year with the lockdowns some might say Athenians are actually using their cars more than before. Is Athens prepared for the possibility that this trend may become permanent?

KB: Over the past year, we've noticed two trends - one is shorter term and one I think longer term. The shorter term trend does speak to some people wanting to avoid mass transit for health reasons and using their cars. But the long-term trend is the new appreciation of the need for quality public space.

We need to find a new, different balance between the rights of drivers, cyclists, and pedestrians. We are on the way. Last year we utilised the methodology of tactical urbanism with the so-called Great Walk. We already see positive results: two of these are that traffic has been normalised in the centre of Athens and we have already seen a very significant reduction of emissions. On Panepistimiou Avenue [a major thoroughfare in downtown Athens] the decrease exceeds 20 per cent. So I think there are plenty of reasons to be optimistic for the future.

The long term plan for Athens

AG: Cities around the world have been changing because of the pandemic and lockdowns. How will Athens be different when tourists start to come back?

KB: I've been reading lots of reports particularly in the international press about the 'death of the city' because of the pandemic and let me just say very clearly that I don't buy these arguments. History suggests that pandemics or public health crises have always been catalysts and opportunities. Look at the London sewage system or New York's Central Park. As we speak there's a global competition between cities and Athens has entered this race. It's a race for three prizes: investment, talent and visitors, or tourists. And I think we have to be very conscious of our place in the world - making sure that we don't just talk about our past but that we plan for our future.

It's not just the Acropolis, though visiting is a not-to-be missed lifetime event, it’s not just the archaeological sites, or the way of life or the arts and culture. Athens is much more than that. I think that while responding to the pandemic, Greece and Athens in particular have proven that Athens is a safe destination: if there's one word I would add to the marketing of Athens in the post-pandemic world, it's safety. Safety is absolutely paramount."

AG: Do you as mayor of Athens have any say in restaurant re-openings, or are those calls made solely by the national government? In Tel Aviv, another Mediterranean tourist destination, there's a 'green passport for indoor dining in restaurants. What about for Athens?

KB: If there is a lesson to be learned from this crisis it's that there are times when we have to put politics and partisanship aside and listen to the experts. We have to make decisions based on facts and we have to be transparent. That's what we have been trying to do in Greece, and that’s why we have been largely been successful in responding to the pandemic and we have to keep doing especially now as we are undergoing a third wave.

There is very close cooperation between the City of Athens and the central government as there should be but it is the experts we are all listening to and not ourselves. We are looking at the light at the end of the tunnel, we are close to the one million mark in terms of vaccinations, I think there is a lot of reason to be actually optimistic about the upcoming Greek summer which we hope to enjoy with all our foreign friends.

The proposal has been made by the Greek Prime Minister for some sort of international certificate or passport of vaccination which I think will be a big step forward for many of us in Europe. There is understandably COVID fatigue within everyone and we all need something to look forward to, such as the Greek summer.

AG: Can you tell me something you love about Athens?

KB: I love the fact that Athens constantly reinvents itself. Athens is a city of surprises. I think that's where our great strength lies, and especially the vibrant young communities that work hard and dream big. I take great pride in a city that is a living organism and that constantly evolves.

Here is the current situation in Athens

Like so many around the world, Athenians have endured several months of lockdowns and a somewhat onerous system of sending obligatory SMS messages before going out (1 for pharmacy or doctor visits, 6 for exercise etc.).

Restaurants and tavernas in Athens won’t be open before mid-April, and then likely for outdoor dining only. Not a very fun chapter in the city’s evolution to be sure, and one that it hopes to put behind it soon, so how are things looking for those key barometers of any city’s tourist-readiness, museums and hotels?

The famed Acropolis Museum remains closed; according to a statement from the press office, “Like the rest of the world and our local community, our major issue is awaiting advice that we can reopen and adjust our operation to whatever is required in terms of public health safety and making visitors and staff as comfortable and safe as possible. (You can check on reopening information here).

For Minas Terlidis, developer of some of the city’s best-known luxury boutique hotels including 18 Micon Street and Asomaton, both near the Acropolis, “It has been quite tough.”

Although they’ve received some support from the state, since November all of his group’s hotels have been closed: “We reopened one of them for March, as a test, but unfortunately there are almost no reservations and we might close it again,” he says.

With Greece now setting its sights on May for a tourism reboot, Terlidis eyes incremental progress with a view to August surpassing 60 percent of 2019’s performance.

“We will probably see a strong end of the year, but we do have to be really conservative,” he says, “as this is something unprecedented.” Ilias Antoniou, owner of The Dilan, an 11-room boutique hotel that opened in September in the middle of the covid-19 crisis, says “the biggest challenge we have had to face as a new business that has invested in the hotel sector is the uncertainty when this investment will pay off,” adding that, “because of the fact that we are a relatively small hotel we are more fortunate than larger hotels which have huge expenses and have to remain closed: we have been able to remain open as the expenses are lower, but the future is definitely uncertain.”

Frosty reception for China hotel with polar bears on show