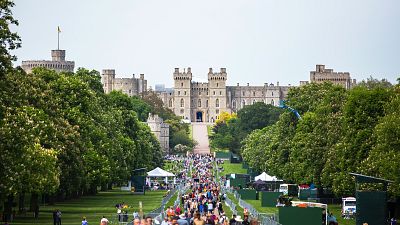 Celebrations were rife outside Windsor Castle on the day of Prince Harry and Meghan Markle's wedding   -   Copyright  Kings Church International via Unsplash
By Shannon McDonagh  •  Updated: 11/03/2021

Prince Harry and Meghan Markle’s interview with Oprah Winfrey have been the subject of much scrutiny in recent days But could a ripple effect be felt in Britain’s already-struggling tourism industry?

Those within the monarchy may be wondering how this crisis might affect their perception on the global stage and subsequent tourism prospects.

Much has been said about the allegations that Meghan was refused mental health treatment from the Palace after admitting that she “just didn't want to be alive anymore”, as well as how she believes her in-laws “failed to protect” her and her son as the first people of colour to enter the establishment.

The Queen has since released a statement saying that “concerning” issues raised in the interview regarding race will be “addressed by the family privately”.

Could tourists who would previously have visited Great Britain now stay away?With the lifting of Covid-19 restrictions and Brexit to consider, the answers are complex.

How the Royal Family contributes to tourism in Britain

The role the monarchy plays in bringing money into Britain via tourism varies depending on who you ask.

The UK’s tourist board VisitBritain says they bring in over €580 million in tourism annually. This would mean they bring in more money than they cost the country. VisitBritain also say that visits to royal landmarks such as Buckingham Palace and Windsor Castle adds up to 2.7 million visitors a year.

Despite this, some experts argue that it is hard to identify when people are visiting Britain primarily due to interest in its monarchy. This is explained in The Conversation’s Factcheck on the topic, where tourism Senior Teaching Fellow Liz Shaples contrasts the data with a more critical perspective.

“Republic, an anti-monarchy pressure group, challenges the view that the British monarchy is good for tourism and argues that other attractions pull in more visitors.

“In 2016, for example, the British Museum was the UK’s most visited attraction, and according to data from the Association of Leading Visitor Attractions, more people visited Chester Zoo and Kew Gardens than Windsor Castle".

Can Britain take the hit?

British tour operators believe that the revelations made in the interview are survivable. "While it is possible the interview will dissuade some people from visiting the UK, the monarchy has survived so many crises from civil war to the abdication, it seems likely they will bounce back from any negative publicity” says Nikki Emms, operations manager at British Tours.

“Tourism could boom on the basis that, if people believe the monarchy is in a state of imminent collapse, they might accelerate plans to visit while all the attributes of our monarchy remain in place”

“Overall, however, it seems difficult to believe that the removal of travel restrictions will not be much more important than any detectable effect from Megxit”.

Royal historian Dr. Ed Owens agrees, despite asserting that Harry and Meghan were “a real loss to the monarchy”.

“So long as the royal family are 'open for business', i.e. the royal palaces and castles remain open to visitors, then I can't see footfall declining. The royal family and royal public events will continue to draw large numbers of tourists to the UK who want to learn more about Britain's royal history and culture”

“Two much greater problems for UK tourism are Covid and Brexit. I would be much more concerned about the negative impact both will have on the tourist industry this summer”.