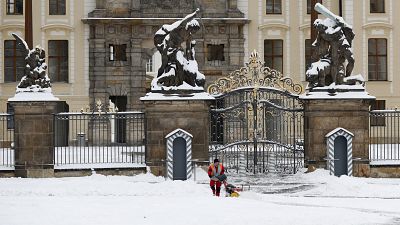 A worker cleans off snow in front of the Prague Castle after a heavy snowfall in Prague, Czech Republic.   -   Copyright  AP Photo/Petr David Josek   -
By Max Thurlow  •  Updated: 24/02/2021

In the past few weeks, Europe has been blanketed in snow following the arrival of Storm Darcy. The low-pressure storm coming from Russia has resulted in disruption on the continent, hitting northern countries the hardest.

The Netherlands and UK especially have experienced severe weather warnings from authorities. Snow blanketed much of Holland on Sunday, forcing the government to cancel a weekly crisis meeting to discuss the coronavirus crisis. Train services were suspended and Amsterdam's Schiphol Airport warned passengers of possible flight cancellations. The Netherlands is also bracing for some high water in the coming days.

In Belgium, snow covered much of Brussels over the weekend causing traffic disruption across Belgium's capital on Monday morning. The heart of the European Union was entirely covered in snow - including iconic landmarks such as the Royal Palace and the Cinquantenaire Park.

People in the Czech capital of Prague woke up to a blanket of snow covering the city on Monday morning. It began snowing before sunrise and didn't stop until there was about 15cm of snow on the ground by 9:00 in the morning. The snow was enough to cause some buses and a few cars to get stuck, but people on foot were able to enjoy the rare snowfall in the parks, walking their dogs, playing in the snow or cross country skiing.

Although the snow has closed schools, COVID-19 vaccination sites and slowed traffic on the roads, it has made for some stunning visuals around the world. Last week, a dust cloud from the Sahara Desert blew across Europe which actually meant, in a rare weather event, the snow was brown on many ski resorts. People took to social media to share snaps of skis cutting white lines into this brown snow.

This Californian desert is covered in unexpected snow

Snowstorm brings parts of Netherlands and Germany to a standstill