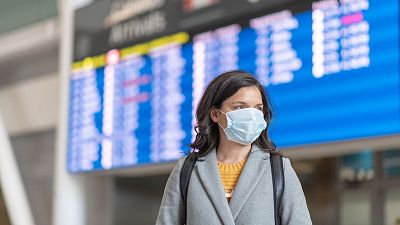 Several countries have closed their borders to the UK after a new, more infectious variant of the COVID-19 virus was discovered in the south-east of England.

France closed its borders to arrivals from the UK on Sunday after Prime Minister Boris Johnson placed London and the southeast under new Tier 4 restrictions - the toughest level of COVID-19 restrictions in the UK which includes a ‘stay at home’ order.

More countries are halting flights to and from the UK every day. The aim is to prevent the spread of this more infectious strain of coronavirus.European leaders are meeting in Brussels on Monday to discuss the new variant.

So what does this mean for travel to and from the UK?

We’ve got all the information you need to know and we’ll be updating this page as the situation changes.

Can I travel from the UK?

Most of the UK is subject to the highest COVID-19 alert levels (Tiers 3 and 4). The UK government advises people not to travel outside of their local area and to avoid all but essential international travel.

There’s more information about travel from the UK on the government website.

Which countries have banned travel to and from the UK?

France, Germany, Italy, the Netherlands, Belgium, Poland, Austria, Denmark, Ireland, and Bulgaria were among those who on Sunday announced widespread restrictions on flights from the UK following Boris Johnson’s announcement.

Canada and India are among the latest countries to halt arrivals from the UK, following the lead of many in Europe.

France eased restrictions on lorries and freight entering France from the UK late on Tuesday - provided the drivers have had a negative result from a rapid COVID-19 test which is capable of detecting the new variant.

Unfortunately, tourists from the UK are still banned from entering France. Only EU citizens can enter France and only if they have a negative COVID-19 test result.

The move from France has added further pressure to the backlog of traffic at both ends of the English channel over the last week and sparked fears of food and medicine shortages in the UK.

Ferry crossings between Ireland and Great Britain can continue in order to keep essential supply chains moving. But in terms of travel and tourism, Ireland has closed its borders to the rest of the UK.

All forms of transport to and from the UK have now been halted until 6 January 2021. This has changed from the initial date of 31 December.

Italy has suspended all flights to and from the UK until 6 January 2021.

The Italian Ministry of Health has banned arrivals from other countries if they have been in the UK in the previous 14 days.

Additionally, anybody already in Italy who was in the UK 14 days prior to 20 December must take a rapid COVID-19 test immediately.

The Netherlands has now permitted passengers from the UK - providing they can show evidence of a negative PCR test. This applies to passengers arriving on planes and ferries.

The Netherlands had previously suspended flights until 1 January.

All but essential travel has been advised against in the Netherlands, and arrivals must self-isolate for 10 days.

If you’re returning to the UK from the Netherlands, you will need to self-isolate.

Belgium imposed a 24 hour ban on travel to and from the UK following Boris Johnson’s announcement on Sunday 20 December.

Now, Belgium is allowing some passengers from the UK, but only for essential journeys or if they have citizenship.

The UK government has advised anybody planning on travelling to Belgium to be prepared to stay abroad longer than planned if the situation changes.

You’ll need to self-isolate on your return to the UK from Belgium.

Flights from the UK to Poland have been banned until 6 January 2021.

From 28 December, you’ll have to self-isolate if you: enter Poland via public transport, have coronavirus symptoms ,or have been in contact with somebody who has.

If you’re planning on being in Poland for New Year, there's a planned curfew from 7pm on 31 December until 6am on 1 January. Travel or movement will be banned during this time.

Flights to Austria from the UK have been banned until 1 January 2021.

If you are arriving from a country not on Austria’s travel corridor list, you’ll be asked to self-isolate.

There's more information from the Austrian embassy in London here.

Travel between the UK and non-EU countries

India has suspended all flights from the UK until 31 December.

Passengers who arrived in India from the UK before 22 December deadline are subject to a mandatory RT-PCR test on arrival. If that's you, there's more information here.

All but essential travel has been advised against in Canada and arrivals from the UK have been banned until further notice.

All cruise ship travel outside of Canada has also been advised against.

The Canadian authorities are also warning people that repatriation flights to Canada are not guaranteed if they choose to travel despite the advice.

All this economic disruption comes at a time of huge uncertainty for the UK, less than two weeks before it leaves the EU’s tariff-free single market and customs union on 31 December.

Following the UK’s departure from the EU, a new set of rules will apply for UK nationals wishing to travel to the EU after 31 December.