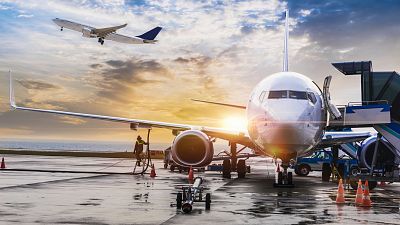 The vast expanse of options available to the modern traveller have made the world smaller in the last century. Interconnectivity has entered its prime, with planes, trains and intelligent road networks enabling worldwide travellers to reach destinations unknown in a matter of hours.

Air travel has undoubtedly changed the world. Assuming the widespread belief that da Vinci invented the helicopter as early as the 1500s is based on concept alone, it was 400 years later, in 1903, that the Wright brothers launched their first powered aircraft.

Around this time, Blackpool beach holidays were the height of fashion in the UK, and the French Riviera was booming across the Channel - and south a bit, to the considerably warmer waters of the Mediterranean. Domestic holidays were exotic enough for most, something to work the year towards, scrupulously saved for by the working class and committed to memory in photographs by the uppers.

Usually, the journey was done by train. Preceding the aeroplane by almost a century, the train became an icon of the Western Industrial Era, the immortalised slogan: it’s quicker by rail. While the railway did indeed outstrip horses, carriages and cars, the invention of the aeroplane brought a whole new dynamic to accessibility.

Suddenly, the rest of the world was a matter of hours away. In January 1914, the first commercial flight began operations between St Petersburg and Tampa, Florida. The 34 kilometre route across Tampa Bay took approximately 23 minutes - relatively slow progress when compared to the record breaking, sub-five hour London to New York flight in early 2020. However, pitted against its contemporary alternatives - at least four hours by rail and two hours by steamship - suddenly the $5 dollar fee (approximately $100 dollar equivalent today) bought this new generation of travellers both time and game-changing experience.

Cue the First World War, which somewhat hindered the progress of aviation travel. While in some ways the war actually fuelled the development of different types of aircraft, commercial flights only really took off in the 1920s. 1929 saw the largest plane built at the time carry 169 people - the Dornier Do X. This record was not broken for an additional 20 years.

By the 1980s, we had entered the Digital Age. The revolutionary progress we had seen from the '20s onwards in aviation - in terms of speed, size and distance records - was slowing down. Flights were becoming a mainstream mode of transport.

Meanwhile on the ground, motorways were developing, towns and cities across most countries were becoming better connected on faster and smoother roads. It was an age where horsepower became more closely associated with race cars than its derivations as a measure of the speed of horse-based transport.

We’re now in an era where you can get from London to Paris in a couple of hours by train. The French TGV travels up to 300km per hour. The Shanghai Maglev isn’t far behind, nor the Frecciarossa, among others. In Concord’s heyday, it could zoom passengers from London to New York in under three hours. Modern air travel means €1 flight sales to practically anywhere, and budget airlines that can take you across the globe for as little as €50.

But of course, this sense of limitless travel isn’t without its limitations. The environmental impact of travel has started to take its toll. This week on Euronews Travel, we’re taking a look at all things sustainable travel, in partnership with our sustainability vertical www.euronews.com/living. Head over to the site, or their social platforms @euronewsliving to find out more.

Check out how the world's top travel destinations looked decades ago