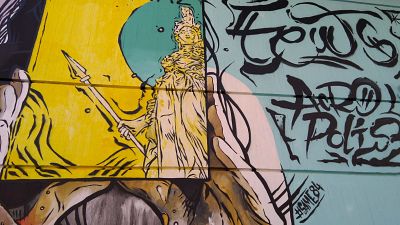 The bustling Athenian neighbourhood of Psirri is a mecca for street art   -   Copyright  Photo: Athony Grant
By Anthony Grant  •  Updated: 16/10/2020

Driving in the teeming Greek capital may seem daunting, but navigating the tangle of ancient monuments and modern streets by car can add an element of adventure to your trip and be a timesaver too, allowing you to go at your own pace and make your own discoveries.

If you can avoid the morning and evening rush hours you may actually find driving around the capital a pleasant experience, but don't pause and stare too long or you'll risk unleashing an orchestra of angry horns behind you. In general, you're should park first and look at a monument after. With a car, you can manage to take in all of the following sights in the space of a single leisurely morning or afternoon.

The Acropolis from Areopagus Hill

Improbable as it may seem you used to be to able drive pretty close to the base of the Acropolis but for the best view today just head over to the quiet neighborhood of Thisseo and park as close as you can to the craggy rock of Areopagus Hill (it's pretty easy during the day and best of all there are no parking meters). Climb up the stairs for the best "up close" view of the Acropolis and Parthenon from anywhere in the city. Snap your selfie and then zip over to the next amazing view.

While you could take the winding footpath some 900 feet to the top of Mount Lycabettus or the funicular, both can get a bit crowded so opt for a pleasant drive instead, just follow the winding road behind the hill until you come to a big parking lot. From there, you can enjoy a panorama of Athens to the sea or walk a short way up to the summit.

The Kallimarmaro marble stadium is one of the most iconic ancient sites of Athens. But instead of stopping on the always-busy Leoforos Vasileos Konstantinou Avenue which passes by the open, front end of the site, turn right on Eratosthenous Street and make your way to Archimedous Street, which is directly behind the stadium. Find a place to park; the neighborhood, called Pagrati, is not touristy so parking should be easy and then approach the stadium from the "closed" back end. You will be rewarded with spectacular views, and you'll be glad to see there's no admission fee on this side.

Temple of Olympian Zeus from your car window

The Temple of Olympian Zeus is something of an underdog among Greek ruins, partly because though Greek in inception it was Roman in completion. The cluster of colossal remaining columns still draws groups of ogling tourists which you could once easily avoid by driving right past them on Vasilissis Olgas Avenue, but now that section is part of the Great Walk; a plan to pedestrianize parts of downtown Athens that has so far met with mixed success and cars can no longer go there. But you can still get an eyeful from Ardittou street, with the Parthenon in the background, or from Vasilissis Amalias which straddles the National Garden and the Hellenic Parliament. That busy byway also affords a nice view of Hadrian's Arch.

Often unfairly maligned in tourist literature because it's so touristy, Plaka is still where Athens puts on its prettiest face. There are pastel-coloured neoclassical facades galore here and some lovely sections like Anafiotika where cars are not allowed. Just pay attention, because traffic streets can turn into pedestrian zones without much warning. For parking, your best bet is to try to locate a spot on the periphery of the neighborhood. From Vasilisis Amalias, on the eastern side, hit any of the streets going west, such as Lysikratous. At the corner of Lysikratous and Vyronos you'll find the best ice cream parlor in Athens, Kayak, You could sit in the outdoor café section with a view of the Choragic Monument of Lysicrates, or just grab a mint milkshake and be on your way.

The bustling neighbourhood of Psirri (also written as Psyrri) is an open-air canvas and mecca for some pretty wild street art. Park your car anywhere you can find a spot; the further west you go from Athinas Street the easier this will be and let the Instagram nourishment begin. There is also plenty of street art in neighborhoods like Exarcheia, edgy Metaxourgeio, and to a lesser extent in Gazi, but Psirri is the closest to the Acropolis and probably the most user-friendly. Rare is the crumbling, flower-strewn neoclassical façade that is not decorated with some artwork.

The port of Piraeus packs in a lot of history and perhaps surprisingly, scenery. Drive south from the main passenger port area to Akti Themistokleous, the "shore" drive named for the ancient Athenian general Themistocles. Remnants of ancient walls that tumble right down to the sea will come into view, and some fine seafood tavernas too. Do as the locals do: park and then feast al fresco right next to the big Greek blue.

How to find your inner Athenian