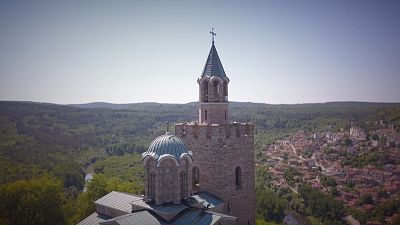 On this episode of Postcards, Euronews is in Veliko Tarnovo, the former capital of Bulgaria and home to a real national treasure: Tsarevets Fortress.

Perched on steep cliffs above the meandering Yantra River, the City of the Tsars, as it is known locally, was the former seat of Bulgaria's medieval kings.

The ancient stronghold boasts an impressive collection of fortified walls, watchtowers, dungeons, a royal palace, 400 dwellings and 18 churches, and it attracts thousands of tourists every year.

Tsarevets is also a powerful symbol of Bulgarian pride.

“For all Bulgarians, to come here once in a lifetime is to make a journey, like a pilgrimage," says Rumyana Pavlova, a guide at Veliko Tarnovo's Regional Museum of History. "It always evokes the memory of our glorious past, when Bulgaria had access to three seas. That was during the 12th, 13th, 14th centuries when Bulgaria was a great political force, competing with the Roman Empire, with Byzantium."

Throughout the ages, occupants of the site have left their own mark on the fortress architecture.

The modern era is no exception and one elaborate painting from the mid-1980s, covers the walls of an entire room, depicting the complex and fascinating history of the Tsarevets Fortress.

With so much to see, one can easily spend hours exploring the site and its peaceful and lush surroundings.

On leaving Tsarevets Fortress, visitors can head just a few kilometres further to the protected village of Arbanasi, known for its historical churches and monuments and its unique mix of Balkan and Ottoman architecture.