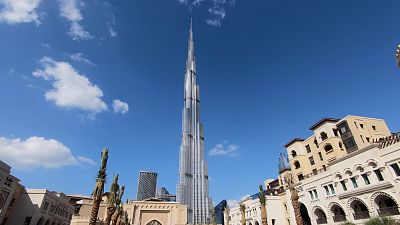 Nothing can prepare visitors for the true scale of record-breaking Burj Khalifa. At twice the height of the Empire State Building and almost three times the size of the Eiffel Tower, it soars 828 metres into the sky. Inside, there are 160 floors occupied by designer Giorgio Armani’s first-ever hotel, award-winning restaurants, luxury apartments and offices – and observation decks at levels 124, 125 and 148.

Colourful wings, painted on observation deck windows, are designed for guests to pose between them. Part of the Global Angel Wings Project by Colette Miller, before appearing in Dubai, they were seen in Australia, China, Cuba, Europe, Kenya, Japan and the United States. The wings hint that humans can be angels of the earth and serve as a reminder to do good.

Next door, The Dubai Mall houses more of Downtown Dubai’s supersized attractions. Visitors can cage-dive with sharks at the vast Dubai Aquarium and Underwater Zoo and Dubai Mall’s indoor ice rink is an ample fit for professional figure skaters at 60 metres long; it can also snow here at the flick of a switch.

While some attractions defy reality, others escape it altogether. Dubbed ‘The Centre of Now’, Downtown Dubai can take visitors to the future at the world’s largest VR Park in The Dubai Mall, a hive of virtual and augmented realities. Dubai in 2050 is the setting of indoor park’s augmented reality rollercoaster, made all the more exhilarating with headsets that place passengers in the cockpit of a computer-generated helicopter. As the virtual helicopter orbits out of the control, the very real, very fast rollercoaster cars plummet through loops and spin on their axes.

Bustling with entertainment, Downtown Dubai’s high-octane epicentre is looped by the laidback, café-lined Sheikh Mohammad bin Rashid Boulevard – a starting point for a public art trail. Downtown Dubai is an urban canvas of sculptures commissioned by Art Emaar, including Richard Hudson’s ‘Love Me’, a gleaming steel heart that reflects the city’s much-loved landscape, and Jorge Marin’s ‘Wings of Mexico’.

Marin’s wings talk to the desire to fly; to dream. Like Miller’s wings inside Burj Khalifa, they’re part of a global series, built for people to pose between, but in this installation, Burj Khalifa is the backdrop and the wings appear to grow from the sides of this towering symbol of human potential and what can be created when we transcend our own limits.

Performing arts also play a part in the story of Downtown Dubai. Dubai Opera sources headliners from the world’s leading stages, but the most-watched show in the neighbourhood is performed by the Dubai Fountain. Sunset signals the beginning of the daily shows with lights, jets and music erupting from Burj Lake. Ever-present Burj Khalifa completes the scene with its own illuminations, the architectural icon at the heart of dynamic Downtown Dubai.