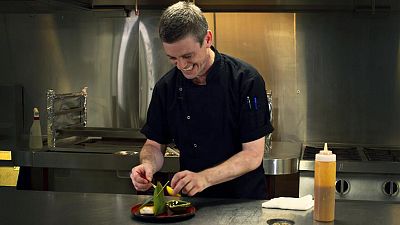 As you enter Shanghai Me, in Dubai's financial district, you may be forgiven for thinking you're in a restaurant in pre-WWII China. Architect Michele Bönan was employed to help transport diners back to the 1930s. He did so by furnishing this foodie hotspot with an art deco-styled interior that you would have typically found in a trendy Shanghai restaurant around 90 years ago.

During this period Shanghai was experiencing dramatic growth, much like Dubai today. It was seen as a new fashionable city and was often referred to as the 'Paris of the East'.

Recently Shanghai Me was voted one of the best restaurants in the Gulf region. Chef Shane Macneill tells Euronews that the winning combination of elegant interior and mouthwatering food is complemented by consistent quality and attentive staff.

It's no surprise that the restaurant has become a favourite place to dine for high profile people such as royalty, celebrities and sports stars but for Macneill it's no added pressure: "We try to provide the same quality to anybody who may walk through the door and dine in the restaurant. Of course, it's exciting for us in the kitchen, when we've had certain guests, names, that come in but generally speaking, it is the same for everyone."

Macneill enjoys the challenge of innovating and improving recipes that have been around for centuries. He explains that a lot of research goes into how a dish is created before it leaves his kitchen, "The sous chefs and the cooks. I like them to get involved with the preparation and the making of the dish. We do a lot of tasting between us and we all have opinions on the dish. And collectively, we then move on to form what we would consider the perfect dish to serve in the restaurant."

Try this dish at home with the recipe below.

Place the fine table salt into the water; once the salt has dissolved it is ready to be used. De-scale the fish and remove the tail fin. Cut from the belly to the tail of the fish all the way to the backbone.

Turn the fish around and cut from the top all the way down the back, meeting the backbone. The fish fillet should be released from the backbone. Clean the belly area and place over ice until you are ready to put into portions. Repeat the same with the other fillet.

In a large pot bring the sake rice wine to the boil, once you have reached this point ignite the alcohol and keep boiling until the flame stops. Once the flame has stopped add the mirin and blend in the miso paste with a stick blender. (Alternatively, alcohol-free sake and mirin can be used).

Once the miso has been sufficiently mixed, add the granulated sugar. Cool the marinade as rapidly as possible. Hand chop the frozen yuzu peel and add it to the unsalted yuzu juice.

Finally, add the yuzu juice (with the finely chopped peel) to the marinade, whisk it to make sure that the citrus has been evenly dispersed. Refrigerate until required.

Take the black cod from the fridge and rest for five minutes before cooking; never cook straight from the refrigerator.

Cook the cod skin side first over the charcoal using the stainless-steel skewers. Once the skin has been cooked, immediately turn over and start to cook the other side at a higher level so the core temperature is above 65 degrees and the colour is not too dark. Remove the bones. Cut the hajikami in three at the bottom, and at an angle on the top. Serve with yuzu miso sauce and sliced lemon.