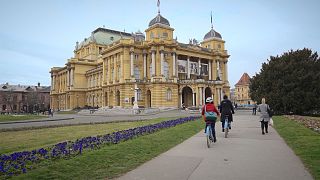 Croatia’s capital Zagreb is known both for its rich history and its artistic soul.

From its local markets, to its street art the city is a vibrant mélange of culture, cuisine and coffee, with an abundance of hidden delights for anyone willing to stray from the beaten path.

One of the best ways to take the pulse of a city is through its markets and Dolac is one of Zagreb's first.

It has been the main farmer's market in the Croatian capital since 1930 and is situated slap bang in the centre of town.

Alida Mezić has worked in the city as a guide for years. When we meet, she tells me why Dolac is such a popular market.

"It's between the Kaptol, uptown, and downtown, so people from all these areas come here to buy, sell and meet," she told Euronews.

A keen foodie, Alida is eager to show off some of the culinary delights that the city has to offer.

Delights like strukli - a typical breakfast pastry that combines cheese, sour cream and spices - and krafne - the world-famous Croatian doughnut.

After breakfast, we take our shopping to one of the most authentic coffee houses in the city - K&K. Once owned by a writer, the cafe's walls are filled with old photographs of Zagreb and its famous characters.

Most importantly, it's a chance to try Zagreb's most famous ritual. Coffee sipping.

According to Mezić: “Having coffee here means meeting your friends, spending some comfortable time. It’s not like in Italy where you just sip a coffee in a minute, here you have to take your time, you have to breathe in, breathe out and enjoy.”

Zagreb is a great city to cycle around, and Mezić knows it inside out.

In the Lower Town, we stop at the National Theatre. Its yellow facade is typical of Austro-Hungarian architecture.

Climbing towards the Medieval part of Zagreb, we pass by the Gothic-Style Cathedral and the colorful church of St. Mark. We arrive at Tower just in time for the midday cannon shot.

The call of Croatia

The city’s way of life is attractive to many foreigners who are choosing to move to Zagreb, like Francisco Rendić, from Chile. We met him in park Zrinjevac in the Lower city, his special place.

“I can travel back in time and think of how was life at the beginning of the 20th century or the end of the 19th century when the Orient Express was passing through the city, so probably it is like a romantic feeling,” he said.

And whatever history cannot be found outdoors, can be found in one of the city's many museums.

Zagreb is said to be the European capital with the highest number of museums per square metre.

One of these could be considered to be the city itself, because of its colourful street art.

Finding the murals is like a treasure hunt, as the paintings are scattered all over the city. What you need are good shoes and lots of curiosity.

The changing face of Zagreb

Zagreb’s street art is fluid. New artworks appear all the time while others fade.

One of the most iconic street art locations, is Medika, an autonomous cultural site where some of the most established street artists continue to leave their mark.

“The first generation started in the early to mid-80s, then the scene spread in two ways - I’m talking at a global level- to street art and graffiti art as well. So it also happened here in Zagreb, not so radically. The result is places like this, one of the most authentic places in Zagreb," he said.

A non-traditional approach to art in Zagreb is spreading, whilst also keeping a link with the city’s past.

Lauba is a former Austro-Hungarian riding stable transformed into a contemporary art space.

Here local artwork can be displayed, like the giant palindrome paintings of Damir Sobota that can be read the same backwards as forwards.

This Malaysian mill is still making coffee the old-fashioned way