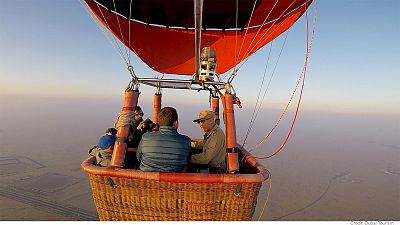 Ballooning is the earliest form of human flight. In 18th century France, King Louis XVI and Marie Antoinette watched as the first passengers - a duck, a rooster and a sheep - took off in one from Versailles.

These days it’s a big attraction for tourists the world over. But in Dubai, hot air ballooning comes with a twist. You can fly with a peregrine falcon.

Falconer Dylan Freeman says it's the only place in the world where you can fly with the fastest animal on the planet.

“What we're trying to simulate here is having the falcon soaring.

“They've been recorded reaching speeds of 389 km/h in a dive. From one kilometre up he can see a pigeon four kilometres away. So then he would fly above it, fold up his wings, and dive down really quickly to try and catch it.”

Peter Kollar, co-founder and chief pilot of Balloon Adventures Dubai, says dawn is a good time to take to the skies.

“It's a beautiful area because it's a mix of desert, pristine desert …… and there are green oases in the desert, which gives a beautiful contrast.”

Kollar says the route the balloon takes is very much up to the weather.

“Eighty per cent of my work is meteorology. If we get the weather right my job is relatively simple. Really ballooning is true flying because you have to use Mother Nature.”