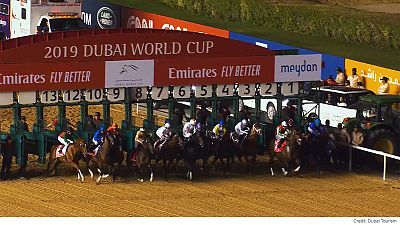 The Dubai World Cup is known as the “richest day of racing” on the international calendar with over €31 million in prizes on the day. The last race of the night and the event highlight is the Group 1 Dubai World Cup which is worth almost 11 million euros. Attracting an estimated 60,000 people from all around the world, it’s one of the most vibrant events on Dubai’s social calendar.

The day starts early at Dubai’s iconic Meydan Racecourse. Race starter Shane Ryan is up with the larks for the morning track work. At the starting gate for the Dubai World Cup Day, he lets the horses out of the barriers. But a lot of preparation takes place in the weeks and months beforehand. Ryan told Euronews.

“The walking into the gate is one thing, standing in the gate is another thing and jumping is another. There are three different aspects to schooling a horse. You work with the horse until he has [it] in his brain; what he has to do on Race Day. Once he knows what he has to do, it’s better for him. Less stress on race day. If he doesn't know what he has to do it’s our job to teach him to keep that energy and then he can use it in a race.”

Preparation for World Cup day is all-consuming. It’s the biggest day of Meydan’s racing calendar. According to Ryan “Everybody wants a piece of the action. There’s a lot of money to be won, so everybody wants it to go well.”

Behind the scenes, Ghrainne Clancy, the head Paddock Steward (at the Dubai Racing Club) plays a vital role in making sure the horses and their riders are in the right place at the right time.

“My role here entails making sure all horses and trainers are organized. Everybody's ready pre-race, and that everyone is in the parade ring on time, and down to the start on time, that they're in numerical order and that they're all wearing the correct equipment.”

She’s worked in the Dubai horseracing industry for the last 13 years and has been at Meydan since it opened in 2010.

“The best thing about my job here is getting to meet people, you’re getting to meet the best in the business here best trainers, best jockeys, and the best horses all compete here. The weather helps as well and it's just a really nice lifestyle and everyone is great to work with. The atmosphere on race day is electric. I mean, if you can hold 60,000 people here, everyone's here to enjoy the racing, and you have a great competition, you've [got] great prize money on offer, they put on a great show, just the whole day is just done to a tee.”

Watch the full episode of the Dubai World Cup, this week on Euronews.