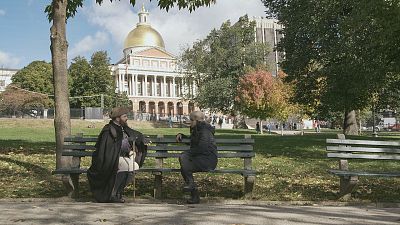 French singer-songwriter Laetitia Shériff is travelling around the US on the trail of musical history and culture. She stopped off in Boston, a city with such an extensive cultural and intellectual tradition that it was once dubbed “the Athens of America”.

“The city is rich in beauty and American history,” says Laetitia, “Walking around downtown you can feel the spirit that comes from being the birthplace of the American revolution.”

Boston’s cultural wealth gives visitors a positive dilemma: how to spend your time there? Whatever you choose to do, whether it’s exploring the city’s numerous historical sights, pounding the streets in search of some authentic clam chowder or admiring the colours in the trees of Boston Common, there’s something for everyone.

“Amazing historic sights and scenery, great live music, New England cuisine and a city full of iconic American history. I only scratched the surface of what Boston has to offer,” added Laetitia.

Boston is one of the oldest cities in the US and was the birthplace of the American Revolution, making it home to many sights of national significance. The best way to discover the centuries of history is with the iconic Boston Freedom Trail, a four-kilometre red brick line that guides you around the city on the search of 16 important historic sights. Over four million people visit the trail every year.

Begin your journey at Boston Common, the heart of the city and a place with a 12-thousand-year story to tell. Then follow the track to discover many of Boston’s 17th, 18th and 19th century landmarks, including museums, meeting houses, burial grounds and parks.

A city built on water

The city’s solidity and old-world charm makes it easy to forget that Boston has, quite literally, risen up from the water. More than two thirds of its surface area did not exist when the city was founded. It was created by the filling in of tidal waters with earth taken from Boston’s three hills, known as the “trimountain”.

To appreciate the scale of the project, you need to visit Back Bay, a neighbourhood known for its well-preserved brownstone buildings, which give it an aura of timeless prosperity. Yet, until the mid-19th century, there were no houses at all in this area, it was still a tidal bay.

You can fully appreciate the city’s close ties to the water by taking a Boston Duck Tour; watching the Charles Regatta or going whale-watching.

Not to be missed: a countdown of our favourite Boston, Massachusetts destinations

From cultural sights to top-notch cuisine, here are a selection of Laetitia’s top picks for things to do in and around Boston.

1. The best way to take in the wealth of history on offer in Boston is with one of the Freedom Trail’s guided tours given by enthusiastic and knowledgeable experts in full costume and character. In addition to the classic revolutionary history tour, a number of other specialised visits are also on offer, from the ‘African-American Patriots’ tour, the ‘Revolutionary Women’ tour and even the ‘Historic Pub Crawl’ tour.

2. Laetitia enjoyed sampling “the authentic taste of New England”, with a traditional lobster roll. The popular dish, a sandwich of lobster meat served on hot bread, is native to the area and is a staple on any summer menu. There are hundreds of great places to sample lobster rolls in the city, Laetitia visited The Yankee Lobster Roll Co, on the Boston waterfront, a thriving family business that's been going since 1950.

3. The USS Constitution, a wooden-hulled, three-masted, heavy frigate, was launched on 21 October, 1797: one of a number of warships designed to protect American vessels from Barbary pirates. During the war against the UK in 1812, she captured numerous merchant ships and defeated five British warships, earning her nickname in the battle with HMS Guerriere. She remained in action until 1855, before becoming first a training and then an exhibition ship. Known as “Old Ironsides”, The USS Constitution is one of Boston’s most treasured historic sights and is the world’s oldest commissioned naval vessel still afloat.

4. Boston is the perfect place for a bit of retail therapy, and Newbury Street is a great place to start. Comprising eight blocks, it is jam packed with fashion stores, coffee shops, restaurants, and boutiques of every sort. Until the mid-nineteenth century, however, Newbury Street was also under water. It emerged as part of the grand residential district in 1882 and has been gradually evolving into a cosmopolitan shopping area ever since.

5. OK, so it’s not strictly in Boston, but Martha’s Vineyard is only a day trip away. This island, located south of Cape Cod, is a summer colony of 260 square kilometres. Check out one of the island’s incredible restaurants, hire a boat, sunbathe on one of the beautiful beaches, or just soak up the holiday atmosphere.

We’ve put together a locally inspired soundtrack to accompany your visit to Boston.

• New Kids on the Block was formed in Boston, and were an instant hit with “Hangin’ Tough” (1988)

• “It’s a Shame About Ray” was released in 1992 by Boston-formed band, The Lemonheads