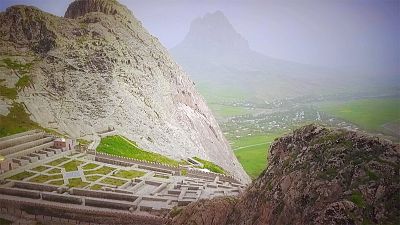 In this episode of Postcards, we take you to Ilandag Mountain, one of the main symbols of the Nakhchivan autonomous republic in Azerbaijan.

In the Middle Ages, there was a settlement on one of it's slopes.

Ilandagh has always been a mysterious place, inspiring local people to create legends.

"Its name is translated as 'Snake Mountain'. According to legend, good people could hide on it, away from villains who were mercilessly attacked by snakes. However local residents say there are no snakes on this mountain at all!"

The main legend says that Noah's Ark actually crashed through Ilandagh during the flood, breaking the top of the mountain in two parts.

"According to the legend, Noah's Ark changed the shape of Ilandagh. At that moment, Noah understood that land was close by. The legend says the Ark finished it's journey around 100 kilometres later when it sat on the top of another mountain, higher than Ilandagh."

You can get a breathtaking view of Ilandagh from an ancient fortress on a nearby mountain. But first, you will need to get to the top of 2,000 steps!