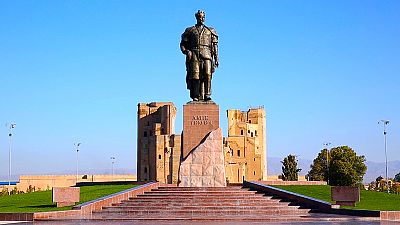 <p>When you arrive in Shakhrisabz in Uzbekistan’s southern Kashka-Darya region you understand immediately how important this place once was and why the old town was placed on the <span class="caps">UNESCO</span> World Heritage List.</p> <p>Towering over the city are the ruins of Ak-Saray, or the White Palace, which was once the massive summer residence of the ancient ruler Temur in the city where he was born and raised.</p> <p><img src="http://www.euronews.com/media/download/articlepix/uzbek-postcards6-bb1-170216.jpg" alt="" /></p> <p>Temur was born in April 1336 and died in 1405. </p> <p>A giant statue of Temur stands proudly in the gardens in front of Ak-Saray, which has been the focus of painstaking preservation work.</p> <p>The original art and decorations on the parts of the palace that remain standing are untouched and there has been a deliberate decision not to restore the mosaic tiles, for example, so the site maintains its authenticity. </p> <p><img src="http://www.euronews.com/media/download/articlepix/uzbek-postcards6-bb2-170216.jpg" alt="" /></p> <p><img src="http://www.euronews.com/media/download/articlepix/uzbek-postcards6-bb3-170216.jpg" alt="" /></p> <p>The legacy of Temur is being kept alive in Shakhrisabz thanks to the major work being carried out around Ak-Saray.</p> <p>Shakhrisabz, which has already celebrated its 2700th anniversary, means ‘green city’; there is certainly plenty of that everywhere you look, with orchards and vineyards. </p> <p>And the new central park will also add to the green image. </p> <p><img src="http://www.euronews.com/media/download/articlepix/uzbek-postcards6-bb4-170216.jpg" alt="" /></p> <p>It is amazing to think that Ak-Saray used to be the highest building in Central Asia and one of the highest in the world. </p> <p>The main structure rose to 56 metres and the two towers were 72 metres high.</p> <p>The building is testament to the ambition of Temur, who went on to rule over a vast empire. </p> <p>Above the main entrance to Ak-Saray it is written: ‘If you doubt our power, just look at our buildings!’ </p> <p>There was even a fountain and a large pool on top of the palace, with water from nearby mountains, which would have been an architectural accomplishment of stunning proportions at the time. </p> <p>The palace was built in the 14th century, but by the end of the 16th century it had been mostly destroyed.</p> <p>A local artist and restoration achitect, Aziz Akhmedov Asatullaevich, has been working on a project to recreate what Ak-Saray used to look like. </p> <p><img src="http://www.euronews.com/media/download/articlepix/uzbek-postcards6-bb5-170216.jpg" alt="" /></p> <p>Also, the palace has not finished revealing its beautiful secrets from the past. </p> <p>Excavation work continues at the site, with new mosaics being uncovered.</p> <p><img src="http://www.euronews.com/media/download/articlepix/uzbek-postcards6-bb6-170216.jpg" alt="" /></p> <p>As well as Ak-Saray, other monuments from the Temur era can be seen in the city’s southwestern district. </p> <p>These include the Dorut-Syadot mausoleum where a son of Temur, Jahongir, is buried. </p> <p>The complex Dorut-Tilavete, which houses two mausoleums and a mosque, is another beauty.</p> <p>Visitors can also enjoy the covered market Chorsu and a domed bathhouse. </p> <p>The traditional local arts and crafts, including embroidery, are also worth checking out.</p>