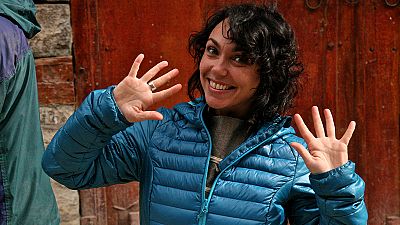 <p>The hammering of coppersmiths is the first thing you hear as you arrive in Lahic. This little village of the Ismailly Rayon, one of the 59 districts of Azerbaijan, has long been known for its metal work, copper in particular. </p> <p><img src="http://www.euronews.com/media/download/articlepix/lahic-life-bb1-220515.jpg" alt="" /></p> <p>Some of the masters say copper was born with this village, hidden in the southern slopes of the Greater Caucasus mountains. Others say that copper working started in the 15th century with its peak just over a century ago, when more than 100 workshops were hammering out water jugs, bowls, dishes and trays. Today five remain.</p> <p><img src="http://www.euronews.com/media/download/articlepix/lahic-life-bb2-220515.jpg" alt="" /></p> <p>Metal work put Lahic on the map during the 18th and 19th centuries, when the village was a centre for weapons manufacturing, much of which was exported. Products made by local craftsmen are well known throughout Middle Asia. </p> <p><img src="http://www.euronews.com/media/download/articlepix/lahic-life-bb3-220515.jpg" alt="" /></p> <p>We spent two days with Kablemi, a 50-year-old master coppersmith, who was taught the art by his father. He, in turn, did the same with his sons; teaching them everything he knows about copper. One of them, Agakishi, 20 years old, is already a master decorator and he tells us that whatever a painter can do with a brush, he can do with a small tool that looks like a long nail. </p> <p>Now Lahij is a historical and architectural centre. It has several mosques, an ancient hammam and a history museum. Walking along the main cobblestone road and entering the workshops is like travelling back in time and moving into a different world. The number of jars, samovars, dishes, trays and cups that you find at Kablemi’s workshop is impressive. Under the dust I saw finely decorated pieces that were made and carved by his ancestors. There was even a model of the Eiffel Tower hanging next to a trombone. The huge bellows used to stoke the fire, probably dating back to the 19th century, he said, looked like a fantasy movie prop. </p> <p><img src="http://www.euronews.com/media/download/articlepix/lahic-life-bb4-220515.jpg" alt="" /></p> <p>Lost in the middle of the mountains, this isolation is what gives Lahic its charm. Here, we are only around 200 kilometres from the capital Baku, but the busy promenade and the modern shops couldn’t seem further away.</p>