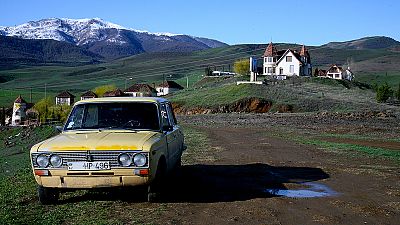 Between the first half of the 19th century and the beginning of the 20th, over 200,000 Germans moved into the Caucasus region of Azerbaijan.

Helendorf was the first German colony and the first Azeri town founded by foreigners. That was in 1819. Later renamed Khanlar, but now known as Göygöl, it carries the indelible mark of 122 years of German cultural influence.

German settlers first arrived in Azerbaijan in 1818. Two hundred families came to the existing town of Elisabethpol, now named Ganja. Helendorf was founded one year later by about 120 families. By 1918 over 6,000 Germans had moved into eight colonies created in the region. They came to the Caucasus for a variety of reasons.

According to Shergiyye Humbatova of Göygöl’s Culture and Tourism Department, “The Germans who arrived here at the beginning of the 19th century came from Württemberg, because of the poverty in their country, because of miserable conditions, war and a lack of jobs. At the same time the Russian government wanted to increase the number of Christians in this area.”

There are no Germans left in Göygöl. The last resident, Viktor Klein, died in 2007 at the age of 72. His friend Fikret Ismayilov took us to his house, which was built by Victor’s father.

We were given special access to the building, before it becomes a museum.

“Welcome to Viktor’s house, this is where Viktor lived. Everything is well-preserved,” smiles Fikret.

Entering Viktor’s house is like going back in time. Viktor Klein was a radio technician. As well as German, he could speak Azeri and Russian. He was well-integrated and rooted in multiple cultures.

“In the kitchen there are two ovens,” continues Fikret, “a German one and a second one from the Soviet era. The German one is better.”

In 1941, after the Nazi attack against the Soviet Union, Moscow issued a decree exiling Germans from the Caucasus. Viktor’s family stayed, but they were an exception. In a period of around one week nearly 200,000 Germans were deported from the Caucasus to Central Asia and Siberia. Over 22,000 had to leave Azerbaijan. It was a bitter blow to a community that had played such a major role in the economic, social and cultural life.

Fikret shows us old photos of Viktor and his mother.

Says Fikret, “His father was a Polish senior doctor. He was a member of the Communist party. At that time there was a decision that mixed couples wouldn’t be deported. Because of that they were allowed to stay.”

We head into the cellar of Viktor’s former home. Viktor, like many other Germans in town, loved to produce homemade wine. That passion was widespread in Göygöl and still today there are many opportunities to taste local wine.

Wine is part of the heritage of German settlers. In 1860 they founded Azerbaijan’s first winery, here in Göygöl. The company founded by the Fohrer and Hummel brothers produced nearly 60 percent of the region’s wine by the end of the 19th century. These days it remains one of the country’s most prolific wineries.

States Rasim Omarov of Göygöl Winery: “The plant continued operating during Soviet times, it produced cognac and spirits which were sold in the Russian market and in Europe.”

The Germans left their mark also in terms of architecture and urban planning.

St. John’s, Azerbaijan’s first Lutheran church, was built here in 1857. Today it is a museum. Strolling around the town centre, you can find over 300 German houses along the notably straight streets.

“There are things we learnt from them, and things they learnt from us. In 1822 that type of construction was a big advance,” says Fikret, a former architect. “At that time, streets in Azeri cities were like this,” he recalls while motioning a zigzag with his hand.

Germans were an active and well-integrated community in Azerbaijan. Their legacy has become part of the Azeri cultural heritage.

In the next edition of Azerbaijan Life we travel to the Great Caucasus to meet the artisans of Lahic, noted for their skills with copper.