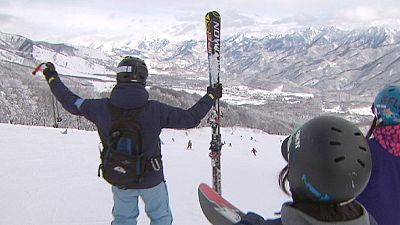 <p>Just two hours from Tokyo lie Japanese Alps, offering the promise of an exotic ski adventure. Powder snow, stunning slopes and monkeys in hot springs – the region is a winter paradise in the Land of the Rising Sun.</p> <p>“In one word, the snow quality in Hakuba: extraordinary,” said one enthusiastic snow boarder we spoke to. </p> <p>“Because we have lots of fresh snow here, we call it snow paradise, “ added his friend, a local ski instructor. </p> <p>“In Hakuba the landscape looks like a painting. With the mountains around us you feel immersed in nature, and I think that’s magnificent,” the third of the trio of skiing friends told us.” </p> <p>They live in Hakuba, in the northern part of the <a href="http://www.japan-alps.com/en/" rel="external">Japanese Alps</a><br /> , which are also known as the ‘roof of Japan’. They spend every day on the slopes, training and indulging their passion. </p> <p>Majestic mountain ranges as high as 3,000 meters surround the valley. <br /> It was here that downhill skiing legends such as “Herminator” Hermann Maier made history during the Winter Olympics in Nagano in 1998.</p> <p>After a long day on the slopes it was time to relax and we headed north east of Nagano to discover something dearly loved by the Japanese since ancient times: hot springs called “Onsen”.</p> <p>Still a volcanically active country, Japan boasts thousands of geothermal springs – more than anywhere else on earth. </p> <p>A bath in the hot mineral-rich water signifies purity, peace and harmony and these natural minerals are renowned for their healing power. </p> <p>“Traditionally we say ‘exposing the soul’- that means to purify the body and soul the hot bath. We also say that Onsen gives you long life,” innkeeper Masae Ono proudly informed us. </p> <p>But it is not just humans that love the hot springs. In Hell’s Valley we discover a unique scene – snow monkeys blissfully soaking in the steaming volcanic water. It It is their very own social hotspot. </p> <p>The world’s most northern-dwelling primates lounge for hours in the bath at a comfortable 40 degrees while outside temperatures can drop as low as minus 20 degrees Celsius.</p> <p>Leaving the snow monkeys in peace we made our way to Nagano, where celebrations for the New Year are underway. </p> <p>The Takeuchi family spends the most important holiday of the Japanese calender together. For the occasion Makiko put on her colourful kimono, a centuries old tradition:</p> <p>“I chose the Kimono myself and I decided to take this one because I think that the round form of the Chrysanthemum looks beautiful. When I wear the Kimono I feel graceful and serene,” she said. </p> <p>The family’s first meal of the year is a sumptuous and symbolic traditional feast. On the menu for the next three days is Osechi ryori, the food of luck which Makiko has prepared with her family. Each colourful dish has a special meaning such as good fortune, health or happiness. </p> <p>“Kamaboko – surimi (crabsticks) has the shape of the rising sun and this signifies the New Year celebrations. We have cut this one to decorate it nicely,” Makiko said.</p> <p>“Later, I would like to continue to prepare these dishes with my children and hand down this tradition to the next generation.” </p> <p>We left the Japanese Alps behind us to make our way southwards to the charms of the islands of the Seto Inland Sea, including a world-famous shrine, a paradise for cycling enthusiasts and the breathtaking Island of Art.</p>