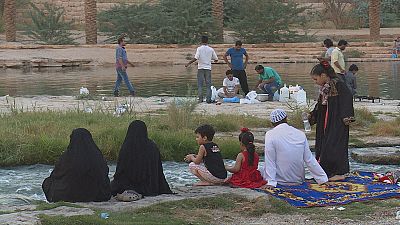 <p>A life-giving valley for the people of Riyadh, that is the Wadi Hanifah with a river which has come back from the dead flowing through the heart of a desert nation.</p> <p>The Wadi, which stretches from north to south through the capital, has been rejuvenated thanks to a decade-long project led by the Arriyadh Development Authority.</p> <p>The now pristine and eye-catching banks of the 120 kilometre long valley are in stark contrast to what it used to be like. The Wadi Hanifah had become a dumping ground, and a serious health hazard. The people of Riyadh had turned their backs on one of their greatest natural resources.</p> <p>“Historically Wadi Hanifah was an environmental resource for ancient peoples. But the development of the city led to the deterioration of the Wadi leaving rubble, holes all over, as well as the impact of factories, industrial activities and pollution by farmers,” explained Saud AlAjmi, Project Manager, High Commission for the Development for Arriyadh.</p> <p>The rehabilitation project introduced a range of measures to undo the damage and turn the Wadi back into an asset for the city.</p> <p>Dams were built to regulate the flow of water. The transport system was redesigned with over 40 kilometres of new roads. Detailed sign posts now point the way along the valley for visitors. And tens of thousands of native trees and shrubs were planted. </p> <p>The Wadi’s rebirth has had huge benefits for the people of Riyadh, including those who make their living cultivating dates along its banks. </p> <p>“I am a regular client here. I buy dates at this farm. The valley was neglected before, but after the improvements the farms have become more visible and accessible. It improved the valley and turned it into a beautiful development project. You come here and you feel the entire place is a resort,” explained Bandar Al Jomah. </p> <p>Integral to the Wadi project is this award winning <a href="http://en.wikipedia.org/wiki/Bioremediation" rel="external">bioremediation</a> plant. This is nature’s way of cleaning toxic water using plants and animals to break down the nasty nutrients.</p> <p>“There are primary producers like algae and higher plants as well as consumer organisms like birds, like fishes, so it is a complete food network. It is like when you organise your home, everybody has his role in the family, everybody is feeding everybody else, to have a happy family,” says bioremediation engineer Badr Al-Tamimi. </p> <p>The techniques used for the project are not new, but never before have they been brought together on such a large scale. It takes just six hours for the water to pass through this plant, it enters full of sewage and leaves crystal clear. </p> <p>Family picnics are a popular pastime in Riyadh and the Wadi has become a favourite meeting spot for them. Seven major parks have been created and another two are under construction. </p> <p>“I have been living in Riyadh for ever and these things didn’t used to exist. I have come out of the city now and I was surprised to see the tidiness, the way everything looks organised, the privacy, the trees, the pavements, everything about it,” said local visitor Abdul Asaiad.</p> <p>The Wadi Hanifah has been brought back to life and is once again at the centre of the community.</p>