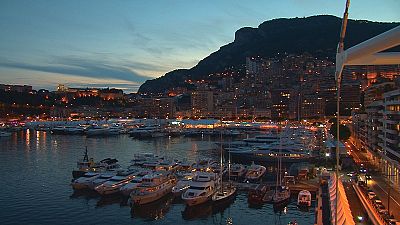 <p>Backed into France, the 2 square kilometres of Monaco resolutely look out to sea. Euronews met the people who have dedicated their lives to the waves. The Oceanographic Museum is a love song from a Prince to the sea. Inaugurated in 1910, this unique building has classical architecture; chandeliers, frescoes, and mosaics: all of them hymns to the sea.</p> <p>The museum was built to house the fauna and flora that Prince Albert I brought back from his oceanographic expeditions over 30 years, from the Azores to Spitzbergen. His first project in 1885 contributed to tracing the Gulf stream as Patrick Piguet, (the Head of the Heritage Department at the Oceanographic Institute) explained: “The work involved launching buoys in the Atlantic, to understand and map the Gulf Stream. Each buoy contained a message in various languages and people replied to the Prince, “I’ve found this buoy in this place” and from these results he was able to map the Gulf Stream.”</p> <p>Prince Albert I was driven by his insatiable curiosity. A very modern man, he was nicknamed the “Navigator Prince”, and the “Scholar Prince”. He was fascinated by technical progress and spent a fortune on ever more efficient ships, to go ever further out to sea and contribute to human knowledge.</p> <p>Today, the same passion motivates the museum’s aquariologists. They are experts at farming corals. <br /> To find out more, we went to see Professor Denis Allemand at the Scientific Centre of Monaco, where coral biology has been researched for nearly 25 years: “We are still the only lab in the world able to cultivate so many species of coral in controlled conditions and to be able to study them and experiment with them here in the lab.”</p> <p>In particular, their researchers are studying how corals react to the acidification of the oceans, caused by global warming. Professeur Denis Allemand said they are also researching the secret of corals’ longevity: “Corals can live for several thousand years without showing any real signs of ageing. So what we’re doing here is trying to understand how and why this animal doesn’t age, and why we do. The aim isn’t really to increase human longevity but to enable us to be old without getting ill.”</p> <p>In Monaco, there is also a temple for sailors: welcome to the Yacht Club, an emblematic building designed by Norman Foster. Bernard d’Allessandri, a noted sailor, he is the club’s director and the captain of the club’s flagship, the century-old sailing ship, Tuiga. He says the vessel is unique: “In an African language, Tuiga means giraffe. It’s very slender, very long, a very sensitive and endearing boat.”</p> <p>The Yacht Club also aims to be a hub for international yachting. It’s a major industry in Monaco, providing around 1,200 jobs in a variety of sectors: submarine works, maintenance or services for example when yacht owners throw an on board party.</p> <p>Bernard d’Allessandri said: “It’s difficult to put a precise figure on the economic benefits. We think, according to estimates, that it is around 600 million euros a year. So that’s quite a high figure, if you consider the size of Monaco.”</p> <p>For more about About Albert I<br /> <a href="http://www.arehn.asso.fr/centredoc/livres/albert1/albert1.html" rel="external">see the official site.</a> </p> <p>About the Yacht club:<br /> <a href="http://www.yacht-club-monaco.mc/en/introduction-in51.html" rel="external">see their website.</a></p> <p>About Tuiga:<br /> <a href="http://fr.wikipedia.org/wiki/Tuiga " rel="external">see Wikepedia.</a></p> <p>For more about the Research Center <a href="http://www.centrescientifique.mc/en/" rel="external">see their website.</a><br /> ​</p>

Monaco, the sea, and the lonely turtle