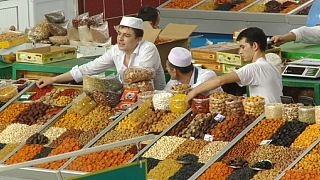 The city of Almaty lies to the south of Kazakhstan, a stop off point in years gone by on the Silk Road, the great trading route that linked east and west.

Trade and economy are still at the heart of Almaty which was once the country’s capital. It is the financial centre of central Asia and attracted some six million tourists last year. History, hot summers and a raft of winter sports on tap are among the top attractions.

In the hustle and bustle of modern development Almaty has not forgotten long held traditions like the famous steam baths, the Russian Banya.

Some like it hot first thing. Bagdat Yermagambedov has been taking the steam for 30 years.

“Its a tradition here and everyone likes to start the week with a Banya to gather energy for the rest of the week, but what is a Russian bath without the steam – its not a bath! It’s a great pleasure to come here to the steam rooms to re-charge our energy,” he explained.

The vast Arasan complex was opened in 1982 and has been hailed as the best ‘Banya’ in central Asia. If a massage is not for you there are many other ways of ending your visit.

Some people like to start the day with a good thrashing; birch leaves pummel the skin and its supposed to stimulate the circulation to take the stress out of the day before you have even started. It doesn’t so much hurt as it stings.

A morning in the Banya is perhaps the perfect preparation for a visit to the busy Green Bazaar. On the Silk Road it is Kazakhstan’s biggest market and brings to life all the finest traditions of the Asian bazaar, buying selling and meeting people.

The word Almaty means city of apples and the region is believed to be the ancestral home of the apple as one stallholder pointed out: “The apples from Almaty are considered to be top quality and we have many different varieties, and of those the most appetising, the most popular and well known, is this one here – the Aport.”

Underground for the commuter its all less crowded where you can get a seat at any time of the day on the new metro.

Opened just six months ago the metro was 23 years in the planning and finished at an estimated cost of 900 million euros. The platforms and seven stations on the 8.5 kilometre stretch have gleaming marble floors.

Two more stations are set to open. Soon they will be buzzing with more passengers.

Beyond the city boundary you will hear the motto of a group of children echo in the mountain air. “We don’t take the easiest path,” they chant.

Local climber Maxut Zhumayev started this childrens’ camp. He is one of only 12 mountaineers to scale the 14 peaks over 8,000 metres without oxygen, a remarkable feat.

Not quite the heights which 11-year-old Iskander Temirtas is aiming for. At the summit he wants to take an easier route down but is told he can’t. Maxut has banned mobile phones, iPads and computer games.

“I want children to believe in themselves, in their power, their force. Its very important for me that they use me as an example so that they can see that you can climb Everest, you can be the strongest and win Olympic medals. There is nothing too difficult in this life,” he said.

Maxut is hoping his philosophy will catch the imagination of a new generation and his mountain camps will grow to become an integral part of life in Almaty.