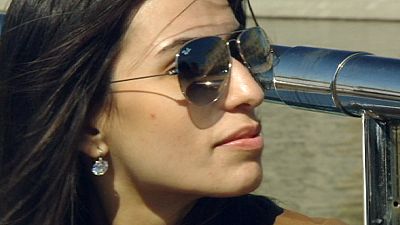 <p>In the final episode of our journey around Russia, euronews takes a trip through the capital along the Moskva river. </p> <p>Moscow was named after the river in the 12th century, and today a short boat trip along it can still offer some of the city’s most scenic views, enabling the traveller to capture the mix of history and modernity in ‘the city that never stops.’</p> <p>Passenger boats are one of the most pleasant ways of discovering Moscow’s landmarks – when the weather is good. The Kremlin, the main seat of political power is a fortified complex at the heart of Moscow which overlooks the river. It is an unavoidable attraction for anyone visiting the city centre.</p> <p>Golden domes of Orthodox Christian cathedrals are another iconic landmark, with some of the most important religious sites located by the river shores. </p> <p>Novodevichy Convent, one of Moscow’s World Heritage Sites, looks much the same as it did in the 17th century, although in the Soviet era, the monastery buildings were turned into apartments and museums. In the 1990s nuns returned to the convent and religious services resumed.</p> <div style="width:280px; float:right; padding:8px;"> <div style="border-top: #333 3px double; border-bottom: #333 3px double; font-size:12px;"> <h3>Factfile: Moscow</h3> <ul> <li>The first reference to Moscow dates from 1147</li> <li>Moscow is the most populous city in Europe with more than 11 500 000 inhabitants</li> <li>The average temperature is -6°C in winter, and +18°C in summer</li> <li>The average salary in Moscow equals 1000 euros</li> <li>Moscow has the greatest number of billionaires in the world and is ranked fourth in the global list of most expensive cities to live in</li> </ul> </div> </div> <p>Sister Margarita from Novodevichy Convent told us a little about the buildings turbulent history. </p> <p>“After decades of very difficult years for our country, there came a time when the Russian people got an opportunity to rethink their whole life, to look back into their history, to draw the appropriate conclusions and start praying to God once again,” she said.</p> <p>The convent, which is open to visitors, is a peaceful retreat from the bustling city and a place to find some of the restored religious art.</p> <p>A hill above the river is crowned with the massive main building of the Moscow State University. Russia’s best known academic centre brings in tens of thousands of students from many countries. Built as part of Joseph Stalin’s large-scale effort to modernise the city, the Moscow University is one of seven neoclassical skyscrapers scattered throughout the capital.</p> <p>Another example of this distinctive style is the historic Hotel Ukraina, now owned by a luxury hotel chain. The hotel has preserved its famous art collection – more than 1,000 original paintings by the most prominent Soviet artists from the first half of the 20th century, as well as a unique diorama of Moscow created in 1977.</p> <p>The taste for cultural heritage can be felt everywhere around the city – some of the best restaurants serve traditional dishes of Russian cuisine with its generous helpings of fish, poultry, game, mushrooms, berries, and honey. </p> <p>The largest green oasis in the busy metropolis – Gorky Park – recently went through a major transformation, to become a top hang-out destination for Moscow’s youth. </p> <p>During the post-Soviet era the park used to be full of noisy fun fairs, cheap attractions and a Ferris wheel. But now they have been replaced with yoga classes, a bowling café and an open-air cinema. </p> <p>Olga Zakharova the Director of Gorky Park told euronews about the improvements: “Before, all you could do was just ride the rides, eat candy-floss and popcorn, and that’s all. Now this park is totally different – it has a rich cultural programme that brings a completely different range of people.” </p> <p>This brings our trip around the world’s biggest country to an end. We hope you have enjoyed exploring some of its most amazing sites with us, from Kamchatka to Kaliningrad. If you have missed our trips to the North Caucasus, Altai or any other Russian regions these episodes are all available in the life section of our website.</p>