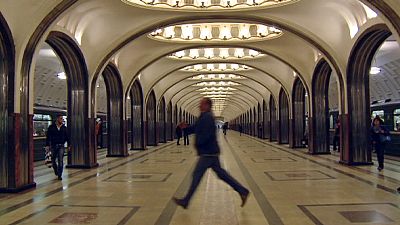 <p>In the penultimate episode of Russian life, euronews explores the capital Moscow. </p> <p>We began with the city’s famous underground. Carrying over 7 million passengers a day, the metro is Moscow’s vital transport artery, and the best way to avoid the sometimes unbearable road traffic.</p> <p>It was also one of the USSR’s most extravagant architectural projects, embodying the utopian idea of a bright Communist future. The original stations, built in the 1930s, are true underground palaces with marble walls, elaborate mosaics and cast bronze statues.</p> <p>Most of the metro lines run through the city centre, which is covered with attractions. One of these is Arbat, one of the oldest surviving pedestrian streets, displaying diverse subcultures and lifestyles of the Russian capital. </p> <div style="width:280px; float:right; padding:8px;"> <div style="border-top: #333 3px double; border-bottom: #333 3px double; font-size:12px;"> <h3>Factfile: Moscow</h3> <ul> <li>The first reference to Moscow dates from 1147</li> <li>Moscow is the most populous city in Europe with more than 11 500 000 inhabitants</li> <li>The average temperature is -6°C in winter, and +18°C in summer</li> <li>The average salary in Moscow equals 1000 euros</li> <li>Moscow has the greatest number of billionaires in the world and is ranked fourth in the global list of most expensive cities to live in</li> </ul> </div> </div> <p>A couple of metro stops away stands the iconic neoclassical facade of the Bolshoi Theatre – one of the world’s most renowned ballet and opera companies. The historic main building has recently been reopened after an extensive six-year renovation that cost, according to official estimations, more than half a billion euros.</p> <p>The first major repairs in 150 years restored the acoustics to their original quality and brought back the Imperial decor. Katerina Novikova the Bolshoi Theatre spokesperson told us about saving the endangered theatre:</p> <p>“There was a real threat of losing the building that served as a true symbol of our culture for Moscow as a city and for all Russians. The building was preserved and expanded, so now it has twice as much floorspace and the stage is bigger”.<br /> Another historic building that still fulfils its original function is the Moscow <span class="caps">GUM</span>. The main department store built at the end of the 19th century is now a place of luxury shopping that keeps some elements of Soviet nostalgia in its decor.</p> <p>Other objects of Moscow’s architectural heritage have found a new vocation. Winzavod used to be Moscow’s oldest winery but now this serves as an important contemporary art centre.</p> <p>Elena Panteleyeva, the director at the centre says:</p> <p>“There’s a lot to see and discover in Russian modern art. It’s very distinctive, and at the same time it gradually shifts to fit nicely into the European and global context.”</p> <p>Experts select young artists from all around Russia, granting them exhibition space in the mysterious and evocative halls.</p> <p>A family-friendly way to end an eventful day in the Russian capital would be a visit to the famous Moscow Circus on Tsvetnoy Boulevard. This is one of Russia’s oldest circuses. It was founded in the late 19th century and some of the most famous artists have performed in its arena.</p> Boris Fedotov one of the performers at the Old Moscow Circus spoke of the joy the circus gives: <p>“Circus is always a happy festival, a bright, colourful spectacle in colourful costumes with beautiful music, played here by a live band.”</p> <p>In the next edition, we will continue our promenade along the most picturesque sites on the banks of the Moskva river. Join us next week in Russian Life.</p>