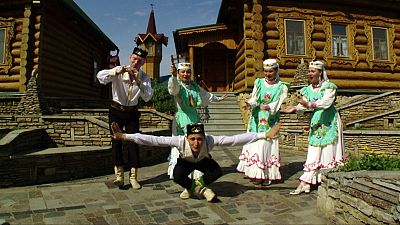 <p><i>Denis Loktev, Kazan</i></p> <p>As we arrived in Kazan, we found a city-scale construction site: the Tatar capital is getting ready to host a series of international sporting events (2013 Summer Universiade, 2015 World Aquatics Championships and 2018 <span class="caps">FIFA</span> World Cup) that should help the republic rise to prominence – bringing more visitors to this picturesque Volga region in the process.<br />  <br /> For Tatarstan, it’s an opportunity to promote its traditional heritage and its experience of sustaining a genuinely, multicultural society with little or no conflict between its ethnic and religious groups. <br />  <br /> For one of the most urbanised regions of Russia, Tatarstan hasn’t forgotten its historical roots. In the centre of Kazan, the republic’s capital, we came across the most authentic of rural villages, which really reflected the old, Tatar lifestyle – where folk songs, traditional buns and rolls, games and dances are part of everyday life.<br />  <br /> We then took a small passenger boat from Kazan to Sviyazhsk, a strategically located island that was used by Ivan the Terrible when he attacked Kazan in 1551. The boat trip upstream takes about three hours – twice as long as by car (a narrow road links the island to the mainland nowadays) but the riverside views are so spectacular, it’s worth the extra effort. <br />  <br /> Some of the rarest examples of Russian architecture (dating back from the 15th century to the beginning of the 20th century) are still standing today. Many churches were demolished during the Soviet era; large, wooden crosses mark their former sites. Now, all of the main buildings are going through a process of reconstruction and the island is expecting a huge influx of visitors next year. <br />  <br /> Art restorers recreated the churches, which were used as Gulag prisons and storehouses, after the Bolshevik revolution. All the original icons are kept in museums, while painters have made modern copies to redecorate the temples.<br />  <br /> Not too far away, there’s another unique example of Tatars’ historical heritage: the city of Bolgar. It dates back to between the 8th and 15th centuries and used to be the capital of the era’s largest Eastern European state. Ancient Bulgars are considered the historical ancestors of the Tatar people, who still practice Islam as their predominant religion today. Like Sviyazhsk, Bolgar is also being rebuilt, with both sites expected to be finished by next year.<br />  <br /> In Bolgar, medieval ruins are complemented by modern restorations and new buildings commemorate the adoption of Islam by the Bolgars in 922AD. The Bolgar museum is hoping to receive <span class="caps">UNESCO</span> recognition as a world heritage site but with all the modern additions, it may not be so straightforward. <br />  <br /> One thing’s for sure though, Sviyazhsk and Bolgar are quickly becoming two of the most interesting attractions in the Volga region – displaying a revealing and peaceful perspective on the historical co-existence of Islam and Christianity.</p>