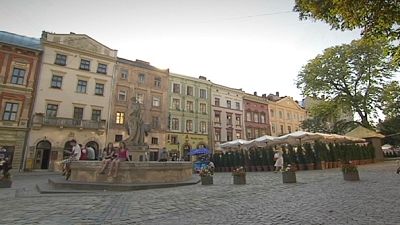 <p>The city of Lviv in the west of Ukraine is perhaps the best example of the stark differences between the country’s main centres.</p> <p>Its ancient streets give the city a feeling of being an historic and popular spot in Western Europe. It is not surprising that Lviv is often referred to as the ‘Little Paris of the East’.</p> <p>Many of the old buildings and monuments date back to the 13th century, reflecting various European styles and periods. </p> <p>Lviv largely survived the conflicts of the past and it is said that half of Ukraine’s architectural monuments can be found in the city. With a population of more than 700,000 it is now considered to be one of the country’s main cultural centres. </p> <p>“The preserving of national identity is very important in Lviv, especially since Ukraine became independent. We are trying to preserve everything related to our national Ukrainian culture,” explained historian Liza Yanchukova.</p> <p>Once a main trading centre between East and Western Europe, Lviv has had many influences after hundreds of years of Polish and Austrian rule, then German occupation and the Soviet era. Seven years after Ukraine’s independence, Lviv was added to the <span class="caps">UNESCO</span> list of world heritage sites. </p> <p>Enhancing the city’s character is a tramway system that dates back to 1880. It is also one of Ukraine’s main centres for research and learning, with close to 70 institutes and centres of higher education. </p> <p>The large student community seems to thrive on the city’s popular café culture and mix of influences.</p> <p>“When you stroll through the narrow streets of Lviv you really feel the scent of coffee, the scent of chocolate and the scent of old times. So Lviv is very unique because a lot of cultures are merged in it, and that is very important to understand it, if you want to feel the city,” said Christina Homa, a languages student at Lviv University.</p> <p>Euronews reporter, Seamus Kearney points out: “Lviv is also remembering its sad history. A monument in the city is dedicated to local Jewish people killed in the Holocaust.” </p> <p>Before the Second World War about a third of the city’s population was Jewish; today the community numbers only about 5,000. </p> <p>Even though impressive churches have always been a part of the skyline in Lviv, there is now talk of a resurgence in religious life over the past 20 years.</p> <p>And when it comes to culture, literature is enormously popular, in a city where Ukraine’s first printing press was founded.</p>