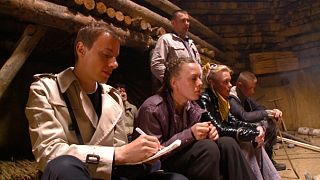 The Ural mountain’s (the eastern part is considered a natural boundary between Russia’s Europe and Asia) are not very high. But locals are proud to point out that this formation is one of the oldest surviving mountain ranges on Earth. The destination is also much more affordable for the average Russian family than the European Alps.

When we arrived at Abzakovo, the largest ski resort in the area, was crowded with famillies celebrating the 1st of May. It is a holiday and officially called the Day of spring and labour, which was originally the Soviet International Workers Solidarity Day.

Just an hour’s drive from the slopes is the industrial city of Magnitogorsk, home to one of the largest iron and steel works in Russia.

The city has a scary anti-utopian skyline of rising smokestacks, some of them ending with flares of burning gas.

The strong wind carry the industrial smog into the city, making children’s health the biggest concern for parents. Skiing, cycling or simply walking in the mountains are popular way to get some fresh air.

Most of the people we met on May 1st preferred taking walks and enjoying the picturesque views of the Urals.

One or two ski slopes were still open – the layers of wet snow are pretty thick, so those interested in skiing or snowboarding can continue to have fun.

The main hotel, which was built in the Soviet times, has kept most things intact. There are some new attractive places to stay for those who can afford to spend more.

Another main attraction of the southern Urals, especially for fans of archaeology and past cultures, is the ancient settlement of Arkaim and the large historical park that surrounds it.

The site, which is a couple of hours from Magnitogorsk, was discovered at the end of the 1980’s. The area was going to become a new  water reservoir but after a routine archeological examination that changed.

A team of young scientists, led by Gennady Zdanovich, found traces of circular walls dating back to the 17th and 20th century BC.

The large wooden and clay castles were protected by high-rising multi-level walls and elaborate labyrinth passages at each of its four entrances.

The discovery made headlines all over the world, fuelling a massive campaign to protect the area from flooding, which was successful.

Linked to Proto-Indo-European Arian culture, Arkaim quickly became a place of pilgrimage for all kinds of New Age followers. The area was promoted as a mystical site, making it Russia’s answer to England’s Stonehenge.

Today the Arkaim settlement is mostly buried underground for protection.

It plays a more scientific role as the center of a huge open-air museum.

It features an exhibition building and several visiting sites. Starting from Stone Age dwellings built with real stone tools according to actual designs of pre-historic buildings found in the area and up to the modern traditional Cossack culture of the 19th century.

The southern Urals needs to be improved so that it can be a touristic destination equal to other foreign historical sites.

This region is gifted by its nature and heritage but needs better travel infrastructure to attract more visitors.