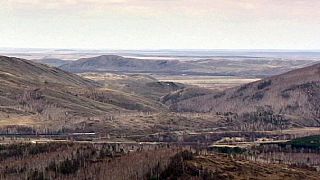 The Ural mountains are a natural boundary between Russia’s European and Asian parts. It’s spring but the local climate allows skiing until early May, as we shall see in this issue of ‘Russian Life’.

Russia’s biggest ski resort is spread over the slopes of one of the world’s oldest mountain ranges.

Families from nearby industrial cities and tourists from all around the country come to Abzakovo for all kinds of outdoor recreation all year round.

Mikhail Kuznetsov, head of Abzakovo’s Sports and Tourism office, said: “There are plenty of gentle slopes, excellent for beginners, so you can visit with the whole family. That’s why, I think, the Urals are just perfect for promoting skiing and snowboarding in Russia,”

The great steppes at the foot of the Ural Mountains have seen a number of different cultures that have superceded one another over the course of centuries.

Just a couple of hours away from the ski slopes, this open-air museum tells the local story. Arkaim shows history’s ancient dawn and recent past.

This heritage site was discovered in 1987. The unusual settlement dates back to the 17th century BC.

Its circular clay walls defended the thousands of inhabitants who lived in these beautifully designed dwellings.

The precious foundations of the ancient city are now kept safe under the ground.

A fragment of the defence wall has been rebuilt to demonstrate its elegant layout.

This unique site was meant to be flooded for a water reservoir – it was saved at the very last moment by a big campaign to protect it.

“We found ourselves at a key point in history in this steppe region, we discovered the key to the whole Indo-European formation, which became the basis for many later cultures – Ugric, Turkic, and so on,” said Gennady Zdanovich, the deputy director for science at Arkaim museum-reserve.

“Of course, we couldn’t miss this opportunity to showcase the wonderful history of this steppe and its relations to world civilizations,” he added.

Archeologists found marks of an advanced prehistoric people occupying this area from the third millennium BC.

Local hunting tribes discovered how to domesticate horses and made the important shift from temporary shelters to permanent dwellings.

Today at the vast museum site we find carefully restored dwellings of Stone Age men, built with the tools and techniques of the time.

“We have integrated many construction elements of the actual Stone Age buildings, which we managed to identify.

“For instance, a house that burned and collapsed thousands of years ago left an imprint of its roof opening on its floor, giving us an idea of its size, and so on. We used our logic and some advice from building engineers.”

The early iron-age burial mounds, also recreated in the Arkaim reserve, show how the tribes of the Ural steppes built full-scale houses for their deceased leaders, so they could lead their normal way of life in another realm.

The voyage through the Urals’ past ends at the 19th century-style Cossacks estate where traditional Russian arts and crafts are kept alive by local folk culture devotees.

“You know, without a past there’s no future. People who forget their past lose the links to their culture, especially in today’s urbanized world,” said Oksana Maltseva, from the Arkaim museum-reserve.

In the next issue of ‘Russian Life’ we will go to Baikal. The world’s deepest lake is one of the most sacred places in Asia. The land of Buryatia and its spiritual traditions of Buddhism and shamanism.