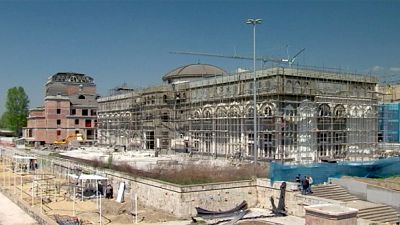 <p>This year Macedonians celebrate the 20th anniversary of their country’s independence from the former Yugoslavia. </p> <p>In the first of a three-part series euronews is in Skopje to find out more about a nation on the move.</p> <p>People in the capital are witnessing a transformation. </p> <p>After much public debate the government has launched a major construction project. </p> <p>Some of the new public buildings, including a court house and a museum, will not look modern. </p> <p>Architects have gone for a style from the past. </p> <p>Art historian and archaeologist Lucija Kirovska said: “Looking at things retrospectively, Skopje is building at a very fast pace, in a retro style, which is not something typically found in other European cities.”</p> <p>The capital also has its share of modern buildings and many structures date back to the late 1960s. </p> <p>This is because Skopje had to be rebuilt after a devastating earthquake in 1963. </p> <p>Among the newer landmarks, Skopje-born Mother Teresa has been honoured with a memorial house in the city centre. </p> <p>The new transformation is expected to be completed by 2014.</p> <p>==<div class="a-lire"><div></p> <p><strong>Factfile:</strong><br /> <ul><br /> <li>- A major facelift of the capital was launched by Macedonian authorities in February 2010</li><br /> <li>- The project is called “Skopje 2014”, the year when the work is expected to be completed</li><br /> <li>- The project was not without controversy, sparking much public debate</li><br /> <li>- Dozens of new public buildings, monuments and sculptures are being constructed</li><br /> <li>- Many of the buildings, including a court and a museum, are designed in a classical style</li> <br /> <li>- The population of Skopje, the largest Macedonian city, is estimated to be about 700,000</li><br /> <li>- 80 per cent of Skopje was destroyed in an earthquake in 1963</li></p> <p></ul></p> <p><a href="http://www.euronews.net/2011/05/09/macedonian-diary/">Read more: Macedonian diary </a><br /> </div></div>==</p> <p>TV and radio host Dimitar Antanasovski said: “Before the earthquake my grandparents said that Skopje was more beautiful than it is now. </p> <p>“So, practically, with the whole thing the government and the city of Skopje is building – I’m talking about the look of Skopje – they’re trying to achieve the same look of Skopje as it was 50 years ago and to give a modern sense on the whole thing.”</p> <p>Statues can be found everywhere and most of them are newly created, even if some of them do look ancient.</p> <p>The emphasis here seems to be on preserving the old styles of the past but at the same time depict Skopje as a modern city forging a new identity. </p> <p>But not everything is so recent. One prominent landmark in the city centre, the Stone Bridge, has a rich history that goes back hundreds of years. </p> <p>Lucija Kirovska said: “We are at the Stone Bridge, a place that links the left and the right sides of the city. The bridge was first mentioned in 1376 in the writings of Tsar Dusan.”</p> <p>Over the bridge the Old Bazaar can be found. It is popular with locals and holidaymakers alike with its narrow market streets that date back to the Ottoman-era. </p> <p>Macedonians have always had a passion for coffee and cafés and they are still very much a part of the Skopje landscape. </p> <p>City planners say they want to strike the right balance to achieve urban harmony. </p> <p>Dimitar Antanasovski said: “If we respect the people who live here – I’m talking about the Macedonians, Albanians, Turkish and the other nationalities – and live in a multi-ethnic culture and work together, we will have a nice life.”</p> <p>There is also a growing emphasis on sport and leisure activities, as well as on the chance to get away from the urban bustle.</p> <p>The nearby Matka Canyon is just one of the popular spots. </p> <p>And after the sun goes down in the city more and more Macedonians are making the most of the burgeoning nightlife.</p>