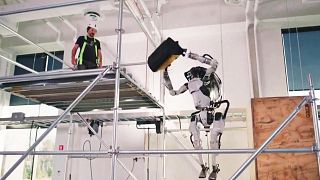 Boston Dynamics’ Atlas robot can now run, jump, pick up and throw heavy objects, and perform complex moves that may one day help humans in factories or on construction sites.

In a newly released video titled “Atlas Gets a Grip,” the humanoid robot grabs and tosses a bag of tools to a worker waiting at the top of a multi-story scaffold.

To some, the new skills might not seem as jaw-dropping as in previous videos where the robot dances to ‘Do you love me?’ and does a backflip.

But Boston Dynamics says the technology behind the new control capabilities is actually more difficult to master than extreme acrobatics.

In the new video, Atlas picks up not only the tool bag but also a large wooden plank, runs up stairs, jumps between levels, and pushes a big wooden box from the platform without losing balance, which the company says is a “deceptively complex task”.

Boston Dynamics highlights that for a robot, performing these manipulation tasks requires a more nuanced understanding of its environment than dancing, where the robot is essentially “blind” to its surroundings.

Atlas, which is 1.52 m tall and weighs 86 kg, has 28 hydraulic joints, three onboard computers as well as battery-powered electric motors for movement.

Boston Dynamics said this flip is much more difficult than previously performed parkour moves because the twist adds asymmetry that doesn’t exist in a regular backflip. Not only are the maths more complicated, but in test runs, Atlas kept getting “tangled in its own limbs” as it tucked its arms and legs.

“We’re using all of the strength available in almost every single joint on the robot,” Robin Deits, a software engineer on the Atlas controls team, said in a company blog post. “That trick is right at the limit of what the robot can do”.

Unlike Boston Dynamics’ four-legged Spot robot, Atlas is not commercially available. It’s purely a research model that aims to push the limits of robotics.

“Parkour forces us to understand the physical limitations of the robot, and dance forces us to think about how precise and dexterous the whole-body motion can be,” Deits said.

“Now, manipulation is forcing us to take that information and interpret it in terms of how we can get the hands to do something specific”.

Ben Stephens, Atlas controls lead, said it was important to the team that Atlas could perform its new manipulation tasks with a certain amount of speed. “People are very good at these tasks, so that has required some pretty big upgrades to the control software,” he said.

“This gives a sneak peek at where the field is going. This is the future of robotics,” Stephens said.

What Jacinda Ardern’s resignation can teach us about burnout