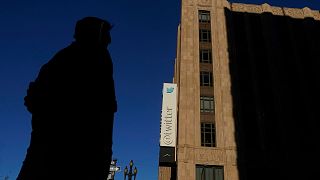 Musk has been reinstating certain public figures who until now were suspended on Twitter   -   Copyright  AP Photo
By Sarah Palmer  •  Updated: 18/01/2023

In March 2022, over six months before Elon Musk officially took over the social networking site, the billionaire took to Twitter to slam the app’s stance on freedom of speech.

From that point onwards, his agenda became pretty clear and his determination to acquire the platform ramped up. On October 27, he did just that, for the sum of €44.4 billion.

In the months since, employees have been fired, verified (blue-ticked) accounts have started being charged for the privilege, and some users who audaciously critiqued Musk’s approach to the platform have been banned.

Conversely, Musk has reinstated some of Twitter’s most controversial figures.

Musk’s “freedom of speech, but not freedom of reach” policy means that while hate speech on the platform won’t be promoted or boosted, users will be able to seek it out - “no different from the rest of the Internet,” to quote Musk himself.

The Twitter Blue subscription has even allowed senior Taliban officials to briefly acquire verified status - including Hedayatullah Hedayat, the head of the Taliban's "access to information" department.

Citing local media, the BBC reported he had his blue tick revoked in December but it recently returned to his profile - before it was removed again this week.

Which other controversial figures has Musk given status to on Twitter?

The former US president was always vocal on Twitter until his account was permanently suspended in January 2021 following the storming of the Capitol in Washington, DC.

At the time, Twitter said this was done in order to prevent “the risk of further incitement of violence”. Following the ban, Trump retaliated by launching his own social media app, Truth Social.

On November 18 last year, Musk asked his Twitter followers whether Trump should be allowed back on the platform. In a Brexit-esque result, 51 per cent of users voted ‘yes’, and two days later, Musk confirmed Trump’s account would be reinstated, signing off “Vox Populi, Vix Dei’: “the voice of the people is the voice of God”.

Six weeks after being banned for sharing antisemitic posts, Kanye West was granted access to Twitter once more - only to have it revoked again on December 2, 2022.

The US rapper, now known as Ye, was banned again for posting an image of a swastika inside the Star of David. It was shared just hours after he stated "I like Hitler" on far-right conspiracy theorist Alex Jones' radio show, InfoWars.

Musk soon afterwards took to the platform and tweeted 'FAFO' (F*** Around and Find Out).

Towards the end of last year, a number of high-profile brands binned their relationship with West over the antisemitic posts shared on his Twitter and Instagram profiles, including Adidas, which terminated its Yeezy trainer deal.

Currently under investigation in Romania over allegations of rape and human trafficking, the social media influencer Andrew Tate is another big name who made a Twitter comeback following Musk's takeover.

On November 18, 2022, his account - which was deactivated over the summer - returned, and became very active in re-establishing the man who was also removed from platforms including Facebook, Instagram and TikTok for a multitude of reasons, not exclusive to referring to women as “property”.

Since then, Tate's account has been removed once again following his arrest in Romania on December 29. He and his brother, who are both detained in the country, have denied any wrongdoing.

Canadian psychologist and author Jordan Peterson made a return to Twitter after being banned last summer for violating Twitter’s hateful conduct policies.

The offending tweets targeted Elliot Page, referring to the transgender actor by his deadname Ellen and preceded a 15-minute long video where Peterson said he would “rather die” than delete the tweet and concluded, “Up yours, woke moralists. We’ll see who cancels who!”

Since his return to the platform, Peterson has made a number of demands on Musk and the future of Twitter - including that Twitter bans anonymous accounts from posting alongside verified accounts.

Over the years, and especially in recent months, a few different public figures have found their Twitter access revoked as a result of factors including inciting hate speech, racism, sexism and more.

These are some of the other accounts the world is nervously awaiting a verdict on.

After rising to fame on the hit UK TV show 'The Apprentice,' Katie Hopkins ultimately gained a name for herself as a right-wing commentator.

Following several short suspension stints on Twitter, Hopkins was permanently banned from the site in June 2020 after telling footballer Marcus Rashford women should “think about how they are going to feed a child before they decide to have it”.

The founder of the far-right conspiracy theory website Infowars called the Sandy Hook school shootings a government orchestration and was banned from Twitter in 2018.

However, Musk has already commented on this, stating on Twitter “I have no mercy for anyone who would use the deaths of children for gain, politics or fame”.