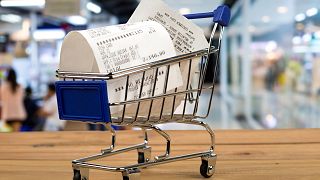 Price hikes in food and energy are among factors that are contributing to record inflation in Europe   -   Copyright  Canva
By Luke Hurst  & Natalie Huet  with AP  •  Updated: 06/01/2023

Inflation across Europe dropped for the second consecutive month in December, according to preliminary data shared by Eurostat, the European statistics agency, on Friday.

Eurozone annual inflation was down to 9.2 per cent year-on-year last month from 10.1 per cent in November, finally dropping from the realm of double digits figures reached for the first time in October, when it surged to the 41-year high of 11.1 per cent.

Though the new data are undoubtedly positive, inflation in Europe remains much higher than the European Central Bank (ECB)'s target of keeping the eurozone area below 2 per cent.

Driven by energy and food, eurozone inflation had reached an all-time high since November 2021 every month. The situation had worsened since the spring with market disruptions related to the war in Ukraine.

But unusually warm temperatures earlier in autumn and winter have led energy prices to return to pre-war levels.

The Baltic countries continue to be the hardest hit. Latvia, in particular, is experiencing the highest levels of inflation in the eurozone at 20.7 per cent in December (down from 21.7 per cent in November), compared to 7.4 per cent a year ago.

The sharpest drop in inflation was in Estonia, one of the countries where prices have risen the most in recent months, where it eased to 17.5 per cent in December compared to 21.4 per cent in October.

**The majority of EU countries using the Euro experienced a decrease in inflation in December, though nine countries remain in double-digit territory.**Here is a look at the inflation rate in each country in Europe:

Following in the footsteps of its counterparts in other parts of the world, in July the European Central Bank  (ECB) raised interest rates for the first time in 11 years by a larger-than-expected amount, as it targets stubbornly high inflation.

This was followed by another record rate hike in September, raising new questions about whether the rush to make credit more expensive and keep inflation in check will plunge major economies into recession.

On October 27, the ECB raised interest rates again, hiking its deposit rate by a further 75 basis points to 1.5 per cent - the highest rate in more than a decade.

On November 29, the president of the ECB, Christine Lagarde, warned that inflation in the eurozone had not peaked and risked rising even higher than predicted - fuelling expectations of further rate hikes.

"We stand ready to adjust all of our instruments within our mandate to ensure that inflation returns to our medium-term inflation target," she said last month.

Europe and much of the wider world were already being hit with soaring energy prices - which contribute to inflation - before Russia's invasion of Ukraine in late February.

The conflict has exacerbated the energy crisis by fuelling global worries it may lead to an interruption of oil or natural gas supplies from Russia. Moscow said in September it would not fully resume its gas supplies to Europe until the West lifts its sanctions.

Russia typically supplies about 40 per cent of Europe's natural gas.