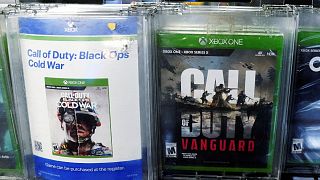 US regulators are launching a legal battle against Microsoft to block its $69 billion (€65 billion) bid to buy "Call of Duty" maker Activision Blizzard, saying the megadeal could hurt competitors in the video game industry.

Microsoft, which owns the Xbox console and game network platform, said in January 2022 that it would buy Activision in the biggest gaming industry deal in history.

Without Activision's games for mobiles, consoles and PCs, Microsoft could struggle to attract users to its budding gaming subscription service.

Activision Blizzard owns some of the most popular games in the world, including the Call of Duty series, World of Warcraft, Overwatch, and Candy Crush.

Microsoft hopes the acquisition will help it compete with gaming leaders Tencent and PlayStation owner Sony, which has criticised the deal.

But, in its complaint, the US Federal Trade Commission, which enforces antitrust law, said that Microsoft had a record of hoarding valuable gaming content. It set a hearing for August 2023.

“Microsoft has already shown that it can and will withhold content from its gaming rivals,” said Holly Vedova, director of the FTC’s Bureau of Competition.

"Today, we seek to stop Microsoft from gaining control over a leading independent game studio and using it to harm competition in multiple dynamic and fast-growing gaming markets".

The deal is also under close scrutiny in the European Union and the United Kingdom, where investigations are underway but aren’t set to be completed until next year.

"While we believed in giving peace a chance, we have complete confidence in our case and welcome the opportunity to present our case in court," he said in a statement.

The FTC said that its concern was that Activision's popular games, including "World of Warcraft" and "Diablo," would not continue to be offered on a range of consoles, PCs and mobile devices.

To woo regulators, shortly after the deal was announced Microsoft unveiled a new set of principles for its app store, including open access to developers who meet privacy and security standards.

Microsoft announced its latest promise this week, saying it would make Call of Duty available on Nintendo devices for 10 years if its takeover went through. It said it tried to make the same offer to Sony.

"The allegation that this deal is anti-competitive doesn't align with the facts, and we believe we’ll win this challenge," he told employees on Thursday, saying that he believed the companies' arguments would win "despite a regulatory environment focused on ideology and misconceptions about the tech industry".

The FTC’s challenge could be a test case for President Joe Biden’s mandate to scrutinise big tech mergers.

Both the Justice Department and the FTC this year have looked at strengthening merger guidelines to better detect and prevent anticompetitive deals.