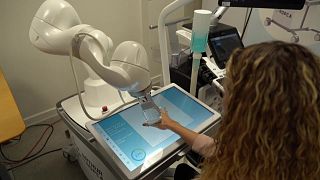 Amid ageing populations and shortages of healthcare professionals in many countries, hospitals are turning to “cobots” – robots that can support or work together with humans.

Research suggests rheumatoid arthritis, an autoimmune disease that attacks the joints, affects up to 1 per cent of the global population and is more prevalent in the United States and northern Europe.

Medical professionals say early treatments, within 12 weeks of the first symptoms, are important due to the progressive nature of the disease.

However, long waitlists can keep people in Europe waiting for almost six months.

In hope of cutting the queues, researchers in Denmark have developed a clinical robot that can run automated ultrasound scans.

Ultrasound scanning is known to be a standardised and effective way to detect rheumatoid arthritis at an early stage.

ROPCA, a spin-out company from the University of Southern Denmark (SDU), says its robot, named ARTHUR, can scan a patient's hands in about 12 minutes and handle up to four patients per hour.

Using an artificial intelligence algorithm, ARTHUR then analyses the ultrasound images it took and sends a report to doctors, along with an electronic health record.

"We are not taking the specialist out of the loop, they are just doing what they're very good at. So, making a treatment plan, adapting the treatment to the specific patient," says Thiusius Rajeeth Savarimuthu, a professor of medical robotics at SDU.

Rheumatoid arthritis patient Mette Spangsgaard hopes the robot can help other people get treated earlier than she could.

"I got the diagnosis late, and now I have some changes, mostly in my feet, my bones, and that's for life. When you just have those changes, it can't go back," she says.

Spangsgaard, now 45, was diagnosed with the disease in 2014 and it forced her to take early retirement from her teaching career.

The robot is priced at €150,000, so its cost could be an issue for cash-strapped health systems.

Rheumatology professor Lene Terslev sees a place for it in clinics lacking trained medical professionals but says the robot not being able to scan feet is another limitation.

Although rheumatoid arthritis is mostly found in the hands, for some patients the symptoms first appear in the ankles and feet.

"If the dominant symptoms are in the feet, that will definitely be missed if only scanning the hands. But we do have data suggesting that more than 90 per cent of the patients will have pathology in the hands," Terslev said.

"For the vast majority, I think we will be able to pick up some disease activity when assessing the hands".