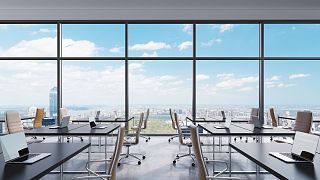 Windows are fast becoming portals into the future.

Scientists in Switzerland are already paving the way for electricity-generating windows that could help power our homes and devices. But now researchers in Saudi Arabia have developed a technology capable of transmitting a wireless Internet signal powered by the Sun through specialised glass.

"I hope that [in future] smart modern office buildings with gigantic glass windows will work with the Internet based on this technology," Professor Osama Amin, lead researcher on the project at the King Abdullah University of Science and Technology, told Euronews Next.

The team of scientists says that if they manage to achieve a high data rate, they will be able to do "anything".

Their technology harnessing windows for Internet data transfer is still in its infancy, with a broadband speed of around 15-16 Kbps.

"The intention is to improve that number radically, but for now, it can already be used for IoT applications because sensors need a low data rate," he said.

"We're going towards the smart house. And any type of sensor should benefit from this".

Sunlight turned into binary ones and zeros

So, how does it work? Imagine glass windows as a modem, says Amin.

Polarised sunglasses, for example, use electromagnetic polarisation to filter light. They block reflected light and let only useful light through, reducing eyestrain and glare to facilitate vision that’s safe and comfortable for the eyes.

Using sustainable sunlight for data transmission as a green option for wireless communications, that’s the goal.

"The light that comes unpolarised has lots of direction, but the polarisation organises the direction, allowing for some light to pass and some light not to," Amin explained.

But how does this relate to the Internet?

Polarisation allows for the sunlight to be organised into “a kind of one-and-zero language, which is predetermined by the original data coming through a LAN cable connected to the edge of the smart glass,” he added.

"A LAN cable goes to the router, and then we can have this WiFi signal. In our system, the LAN cable will be connected to the edge of the glass, the glass will be a transmitter for the land cable, and instead of using electricity to propagate the signal, it will just use the sunlight".

The variation of the light, which is imperceptible to the human eye, communicates the wireless Internet data to the devices in the room.

"Basically, what we have done is a small device with multiple layers. And these layers can change the light's polarity by modelling the glass's transparency. And when you change the opacity very fast, a stream of data occurs," said Sahar Ammar a PhD Student who participated in the research.

Are our devices ready to pick up Internet from glass?

Usually, wireless communication technologies are based on either radio frequency communication, or optical communication which requires energy-expensive active light sources, such as lasers and light-emitting diodes (LEDs).

The Saudi system functions like any visible light communication (VLC) system, which modulates the light of LEDs to carry information.

However, the team’s approach is innovative because it also modulates the intensity of the natural sunlight while also encoding Internet data in it through the opacity of glass, which can then be detected and decoded by devices in the room.

The devices that could potentially benefit from the sun-powered data transfer technology need to be specially designed to detect the polarised information.

"Using sustainable sunlight for data transmission as a green option for wireless communications, that’s the goal," he added.

The research was published in the journal IEEE Photonic in October.