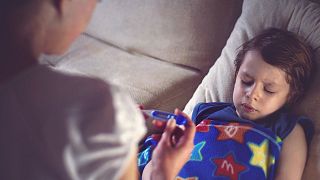 UK health officials are urging parents to look out for symptoms of scarlet fever in their children amid a jump in cases of severe and even fatal Strep A infection.   -   Copyright  Canva
By Natalie Huet  •  Updated: 05/12/2022

UK health officials are urging parents to look out for symptoms of scarlet fever in their children amid a jump in cases of severe and even fatal infection with Strep A bacteria.

According to the UK Health Security Agency (UKHSA), scarlet fever cases are more than four times higher than normally recorded at this time of year, with 851 cases in a week compared to an average of 186 in previous years.

On Friday evening, the UKHSA confirmed that six children under 10 had died after contracting a strep A infection in England and Wales, as it issued a warning about the rise in cases nationwide.

“We are seeing a higher number of cases of Group A strep this year than usual. The bacteria usually causes a mild infection producing sore throats or scarlet fever that can be easily treated with antibiotics,” UKHSA’s deputy director Colin Brown said in a statement.

“Make sure you talk to a health professional if your child is showing signs of deteriorating after a bout of scarlet fever, a sore throat, or a respiratory infection”.

What is Strep A?

Group A streptococci are the bacteria responsible for Strep A infections. They cause illnesses ranging from a sore throat to impetigo and scarlet fever, but sometimes the bacteria can get into the bloodstream and cause a serious illness called invasive Group A strep (iGAS).

While they’re still rare, invasive Group A strep cases are on the rise this year, particularly in children under 10, according to the UKHSA.

The agency is also investigating reports of an increase in lower respiratory tract Group A strep infections in children that have caused severe illness.

It says there’s no evidence a new strain is circulating, and the spike is “most likely related to high amounts of circulating bacteria and social mixing”.

People can get infected by Strep A bacteria through close contact, coughs and sneezes.

What Strep A symptoms should parents look out for?

In many people, Strep A will cause an asymptomatic infection, but others will have a sore throat, scarlet fever, or in very rare cases the severe invasive Group A Strep disease.

Make sure you talk to a health professional if your child is showing signs of deteriorating after a bout of scarlet fever, a sore throat, or a respiratory infection

While it was a major cause of death in the 19th century, scarlet fever is nowadays typically a mild illness, but it’s still highly contagious.

Treating scarlet fever early on with antibiotics not only helps limit the transmission of the disease, but also reduces the risk of complications such as pneumonia or the infection spreading to the bloodstream.

The UKHSA says parents should therefore look out for scarlet fever symptoms in their children. These include:

If their child is diagnosed with scarlet fever, parents are advised to keep them at home until at least 24 hours after starting antibiotics, to avoid spreading the infection to others.

Parents should also trust their judgment and consult a doctor if their child is getting worse, has lost appetite, or shows signs of dehydration.

Parents should call emergency services or head to the emergency room if:

Strep A infection can easily be treated with antibiotics, so it’s important to spot the symptoms and see a doctor. A swab test can confirm the infection.