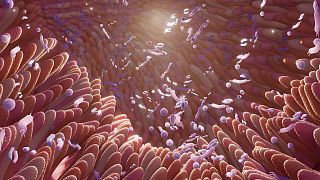 The US Food and Drug Administration (FDA) has approved the first pharmaceutical version of the so-called faecal transplantation procedure, which doctors have increasingly used against hard-to-treat gut infections.

The drug, Rebyota, is designed for adults infected with Clostridium difficile, commonly referred to as C. diff, a bacteria that causes nausea, cramping, and diarrhoea.

Peter Marks, director of the FDA’s Center for Biologics Evaluation and Research, called the approval "an important milestone" providing another option in the fight against recurrent C. diff infection.

Faecal microbiota transplantation (FMT) involves the transplant of faeces from a healthy individual into the intestinal tract of a sick recipient to restore the gut’s microbial composition after disease or infection when the patient does not respond to antibiotics.

Serious infections caused by bacteria resistant to commonly used antibiotics are a major challenge to modern healthcare. This reality has led practitioners to increasingly turn to alternative practices to fight disease.

Research has shown the human microbiota, which is estimated to contain 10–100 trillion microbial cells, plays an important role in maintaining our general health and well-being, both physically and psychologically.

How does faecal microbiota transplantation work?

The recipient of the faecal transplant usually chooses the donor, with most people choosing a family member or close friend.

A sample is then screened for any potential pathogens, and if cleared, the therapy is administered through the rectum by healthcare professionals as a one-time procedure.

The first known description of the use of faeces as therapy was described by Ge Hong, a renowned Chinese alchemist, in the fourth century for the treatment of a variety of conditions including diarrhoea and food poisoning.

In the past decade, patients have become increasingly resistant to antibiotics, and medical research around the human microbe has seen important growth. Doctors in the United States have reportedly been turning to the technique of FMT more frequently.

In parallel, the proliferation of stool banks and faecal transplant practitioners across the country has created regulatory headaches for the FDA, which doesn’t traditionally regulate doctors’ medical procedures.

Now, for the first time, it has given the green light to a faeces-based microbial therapy to prevent recurrent and life-threatening forms of C. diff infection.

A pharmaceutical version of faecal transplantation

On Wednesday, the FDA approved Ferring Pharmaceuticals’ Rebyota for use in patients aged 18 and older after unsuccessful antibiotic treatment.

Rebyota contains a controlled cocktail of healthy microbiota - made from donated faeces - and has been shown to be effective in combating C. diff in adults.

C. diff infection is cited by the Centers for Disease Control and Prevention as an urgent public health threat, responsible for nearly half a million infections each year in the US alone, and close to 30,000 associated deaths.

Symptoms of C. diff - which is more common in older people and people with weakened immune systems - include severe diarrhoea, fever, stomach tenderness or pain, loss of appetite, nausea, and colitis.

Ferring Pharmaceuticals, the Swiss company behind the new drug, is one of many players working to develop novel microbiome-based therapeutics and explore the crucial link between the microbiome and human health.